Thousands march in Algerian capital vowing to keep up movement 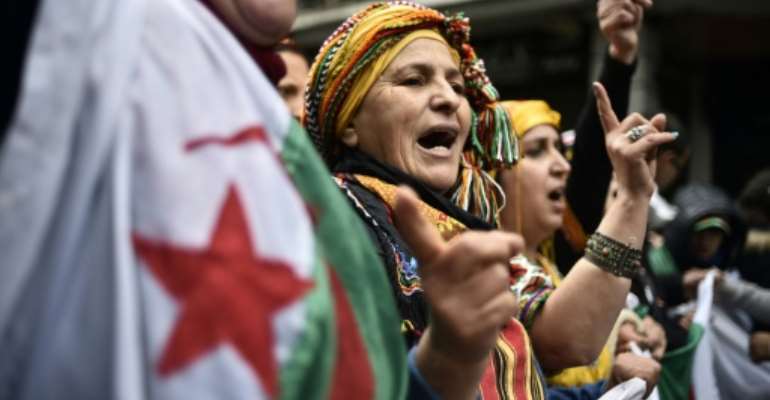 In Algiers, protesters shouted "civil state, not military state" as they marched through the Algerian capital. By RYAD KRAMDI (AFP)

Thousands of protesters marched in Algiers on Friday against the regime, vowing to keep up the movement that has rocked Algeria for nearly a year.

The unprecedented protest movement that erupted in February 2019 has continued to demand the dismantling of the political system and its representatives who have been in power for several decades.

While protesters joined the march in large numbers, the crowd was markedly smaller than the massive demonstrations in early 2019 that forced the resignation of former president Abdelaziz Bouteflika, or those ahead of the December presidential poll rejected by the movement.

Ahead of the march, baton-wielding police broke up a crowd of demonstrators in the heart of Algiers chanting anti-regime slogans.

Police had been deployed in force in the centre of the capital and several protesters were arrested, witnesses said.

"The Hirak (protest movement) must continue until the complete removal of the 'gang' -- these traitors who sold out the country and hurt the future of our youth," protester Farida Loukam told AFP after she was violently shoved as police tried to tear away her anti-government banner.

Despite the initial dispersal, the march went ahead and ended amid calm around 1700 GMT.

Thought exact numbers are difficult to ascertain and there are no official figures, similar marches drew large crowds in at least 15 other Algerian cities, according to local journalists and social media.

In Algiers, protesters marching in a winter drizzle shouted "civil state, not military state" or "generals in the trash", referring to the military establishment that holds sway over Algerian politics.

"It's you or us, we will not stop," they chanted as they unfurled a giant banner painted with portraits of those detained for activities linked to the protest movement.

Some 76 people who were detained and awaiting trial or had already been convicted were released last Thursday, the majority in Algiers.

These releases account for about half of the roughly 140 "Hirak prisoners" counted by the CNLD prisoners' rights group, which identifies and supports detainees.

"Algerians continue to protest against the regime because they have understood that it's the only way to force change," Ouheb Hamidi, a 38-year-old financial consultant, told AFP.

The demonstration comes a week after President Abdelmadjid Tebboune announced the formation of a new government.

A former prime minister under Bouteflika, 74-year-old Tebboune was elected president on December 12 after a vote marked by record abstention and boycotted by the protest movement.

"President Tebboune was designated, not elected, in a vote that was massively boycotted by the people. We do not ascribe any legitimacy to him," said protester Mohamed Halzoum.

Don't succumb to pressure to support LGBTQI agenda – GMM to ...
33 minutes ago