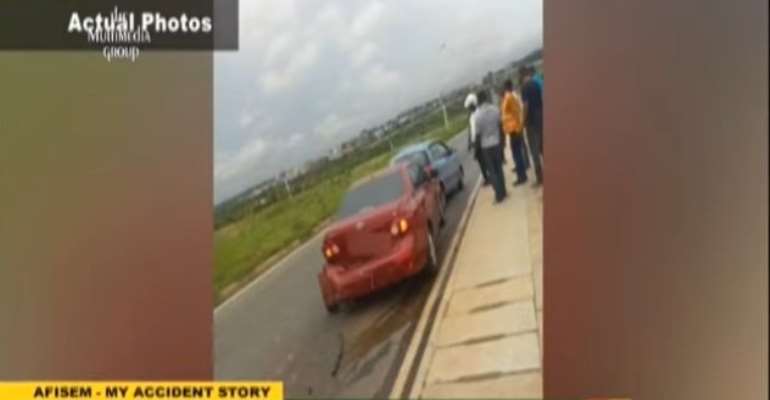 A woman who has been rendered physically disabled after a soldier run into her car, has described the incident as the most trying moments of her life. According to her, while she does not hate the officer for his role, she wishes he had shown more empathy towards her.

Clara Akpo, a nurse at the Greater Accra Regional Hospital was knocked down by Warrant Officer Ralph Gokah while fixing her car by the roadside.

The accident led to a permanent pain in her leg and the subsequent loss of her job.

After spending weeks at the hospital; undergoing an operation and therapy, Clara was given GH â‚µ3,000 by the Officer for her problems. She told Adom News, she would have had to fix her car personally if her husband had not insured it.

“The accident happened on May 31, 2018, after I had picked up my child from work. I felt my car jerk so I stopped. I did not have my triangle out but I had my car hazard lights on and a good Samaritan who is an Uber driver was also parked in front of me. He also had his lights on. The road was a double lane, cars were passing and there was enough space for anyone to pass. I don’t know what happened before the car hit mine and me. My baby was in the car seat at the back. He was just one year six months. I woke up to find myself on the floor, I had collapsed.”

Narrating further, Clara said she did not realise she was hurt until she tried getting up from the ground.

“My clothes were damaged. There was water all over my body and dirty water running beneath me. Bystanders wanted to know who they should call. I couldn’t feel anything, especially my legs. All I had in mind was my child so I started screaming for him. I tried to get up and move towards him, but I could not. My legs looked broken. I just started to cry.”

Clara was rushed to the Greater Accra Regional Hospital where she worked as a nurse for treatment. The case was taken to court and the solider was fined GH¢960. This was after investigations revealed that he was not driving with a licence and his car was not insured.

Watch the full interview with Clara Akpoh below