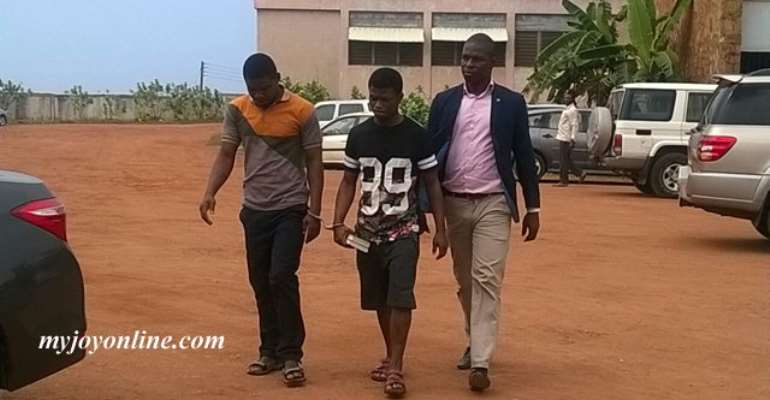 The suspected murderer of the late Member of Parliament for Abuakwa North, JB Danquah, Daniel Asiedu is reported to have nearly stabbed a prison official when his mobile phone was seized in prison, an officer has told the court.

Asiedu aka Sexy Dondon had told the High Court that he was being tortured in prison and that his life was in danger and further showed to the court the alleged scars of torture.

However, a Prison officer told the court that Asiedu was spotted with a phone by a Senior Prisons Officer.

He said the Senior Officer then asked Asiedu to produce the phone he tried to hide after being spotted, since inmates were not permitted to use phones there.

The Officer said Asiedu indicated to the senior officer that the phone was with somebody else, but the said officer insisted that he produces the phone.

He said when the inmate with the phone was invited, he produced two mobile phones so the senior Officer collected them.

According to the officer, as soon as his senior colleague turned to go away, Asiedu attempted to stab the officer with an object so was confined to a solitary room.

The Prison officer further told the court that considering Asiedu's posture in custody he would not be surprised if he inflicts himself with an object.

“What is the essence of justice if the person does not live to see it,” he quizzed.

Mr. Obuor alleged that Prison and Police Officers have a way of beating suspects who would be left without visible marks on their bodies.

Defence Counsel said his client would be beaten for the alleged attempt on the Prison Officer adding that; “this is the fourth time that my client is complaining about torture meted out to him.

“It is only the court that can order the torture of an accused person. The Ghana Prison Service has no right to torture a suspect. My client could be beaten to death and the next thing they would say is that my client died of Malaria”.

Mr. Obuor said: “On that note, we pray the court to admit the accused person to bail”.

Mrs. Sefakor Batsa a Senior State Officer told the court that it would be good to listen to the side of the Prison Officer.

The trial judge ordered Ghana Prison Service to give the accused person the necessary protection.

Asiedu is standing trial with Vincent Bossu for their involvement in the death of the former MP J B Danquah Adu at his residence at Shaishie in February 2016.

Asiedu has been charged with murder and robbery whiles Bossu is facing a charge of abetment of crime to wit robbery.

The court has preserved their plea and remanded them into lawful custody. Hearing continues on January 23.