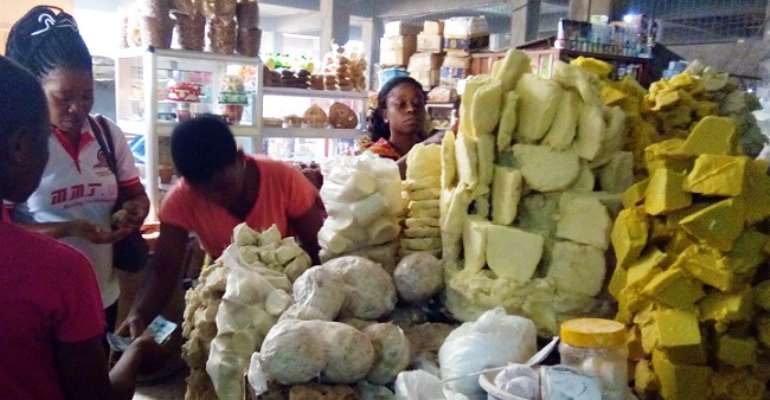 Shea butter business has shot up with sellers making profits of the seasonal product.

Sellers of the product in the Greater Accra Region say demands for the product has gone up due to the harmattan season.

They said the rise in the patronage of shea butter locally known as ” nkuto” which mostly attracts a boom during harmattan season is heavily affecting their pockets positively.

‘Our daily sales have shot up resulting in high profit’.they told Anta Amo, the writer.

This season linger on till ending of January and will be of benefit to shea butter sellers across the country where the harmattan is very severe.

Madam Habiba, a seller at a popular shea butter market at Madina in Accra, said the commodity was previously experiencing low patronage but with the arrival of the harmattan season the demand has gone up.

According to other sellers, the wholesale price for a sack of Shea butter was Ghc300 but the advent of the dry season has shot it to Ghc 350.

'the sales have now improved because some buy it for their skin, while others use it to cook and we hope it continues," she stated.

In foods, shea butter is used as a fat for cooking.

In manufacturing, shea butter is used in cosmetic products.

How does it work?
Shea butter works like an emollient. It might help soften or smooth dry skin. Shea butter also contains substances that can reduce skin swelling. This might help treat conditions associated with skin swelling such as eczema.