Asanteman Associate in New York Scramble for a new chief 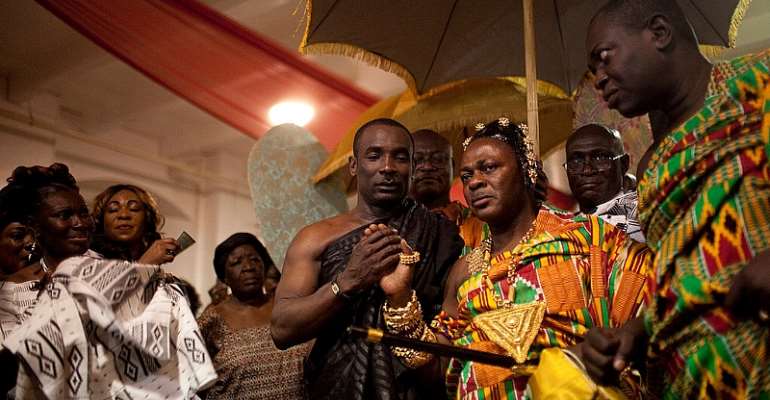 Asante Kotoko, Wu Kum Apem A Apem Beba, that is the slogan of the Ashanti tribe, which literally means "When you kill a thousand, a thousand more will come". This mantra has been tested in the last few years in the Ashanti community here in New York, as there has been allegations and counter-allegations, usurping power, and a major chasm created.

There was a lawsuit adjudicated in a court in New York, where both factions spent a lot of money on lawyers, monies that some felt could have been used to support initiatives in the Ashanti Kingdom.

According to sources within the Asanteman Association, Nana Tieku Okokyeredom, whose tenure as New York Asantefuohene, had expired, refused to step down, because some of the Elders had asked him to stay on until an appropriate successor was found.

This refusal to step down created tensions and a division within Asanteman of New York. Some supported Nana Tieku's stance while others called for him to step down, just as his predecessor Daasebre Nana Amponsah, relinquished the throne for him to be sworn in.

Finally, last year, there was an election which saw a new Asantefuohene and Asantefuohemaa elected by over 100 members in a hotly contested election. Despite the overwhelming support of the majority of Asanteman members, a complaint was lodged by the group siding Nana Tieku, with His Majesty Otumfuo Osei Tutu during his visit to New York in September 2019, against the election of the new Asantefuohene. Otumfuo then appointed one of his Sub chiefs to mediate and come up with a lasting solution. The mediator then advised that the election should be nullified and a new election to be conducted after consulting both factions

This brings us to this Sunday, January 12, 2020, where the new election is scheduled to take place to elect a new Asantefuohene and Asantefuohemaa as well as other key positions within the organization

Candidates for Asantefuohene of New York.

Will all the parties participate in the election? Is this the end of the division and tension within the Asanteman Association of New York? Who will be the new Chief and what will be his platform once elected?. Tune in to Abrokyire Nsem Radio for live coverage of the election or join us online at www.abrokyirensem.com or via Facebook, and YouTube