Tensions flare in French protests as pension dispute grinds on 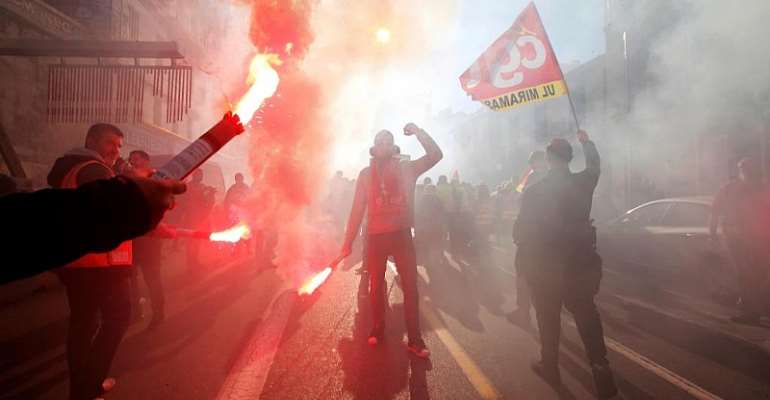 Tens of thousands of demonstrators took to streets across France on Thursday in the latest mass protests against a pensions overhaul that critics say could cut benefits and force people to work longer before retiring.

Tensions flared in Paris and other cities as some black-clad protesters smashed shopfronts and bus stops, while others hurled paving stones at police who tried to disperse crowds with tear gas.

It was the fourth day of demonstrations since the protest began on 5 December, with a public transport strike now in its 37th day.

Police said 24 people had been detained in Paris, where 56,000 people marched toward the Saint-Lazare train station, according to the interior ministry.

Some 452,000 protesters turned out across France, the ministry said, as teachers and other public-sector employees joined train and metro workers.

Government makes new offers
Unions are protesting against plans for a single, points-based system that would sweep away the country's 42 pension schemes, many offering early retirement, mainly to public workers.

The government on Thursday night unveiled two bills intended to appease the unions by committing to salary hikes for teachers and researchers.

However, the unions are unlikely to agree to the measures, which still contain the key sticking point of the "pivot age" -- effectively extending the minimum age for receiving a full pension from 62 to 64.

Commuters in Paris were again hit hard by scaled-back metro services, and the Eiffel Tower was shut as during the previous protests.

Unions have warned the strike could widen, with CGT energy workers this week blockading fuel refineries and depots, raising fears of petrol shortages.

Another day of mass demonstrations has been called for Saturday, and further protests are planned for 14, 15 and 16 January, unions said.

Opinion polls have shown public support for the protest eroding in recent days.