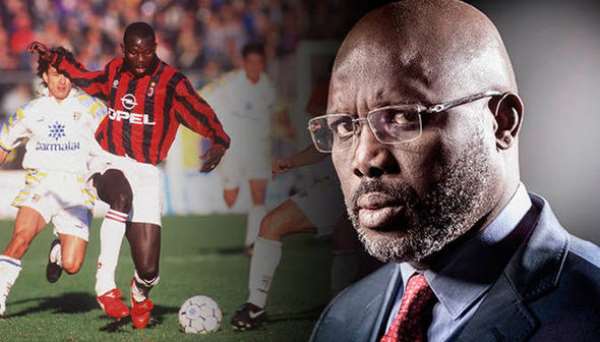 In Africa, where the poor educational background doesn’t prevent one to enter into politics, celebrities, including musicians and footballers have all showed interest in politics.

And due to fame, they often get much support because the common suffering people that have lost confidence in politicians look up to them.

However, the truth is, you can be a famous footballer or a wealthy musician but that wouldn’t make you a good politician.

Good leaders require a strong set of leadership qualities to help build a country politically and economically strong but those qualities are rare in Africa, the reason the richest continent remains the poorest.

In 2017, the legendary football player George Weah became the president of Liberia but his leadership has become a failure since he could not cope with the acute problems within the country’s corruption and poverty.

Liberia is a country that experienced 14-year-old civil war, during which about 250 thousand people died, at that time almost a tenth of the population, and the economy was destroyed. The conflict in Liberia has seriously damaged the entire region.

After hostilities ceased in 2003, the world assisted Liberia to support the transition to democracy and the administration of Ellen Johnson Sirleaf, a former World Bank employee was elected president in 2005.

In 2018, UN peacekeepers packed their blue helmets and headed home. They left behind a dysfunctional economy and a weak state, destroyed by corruption, which was still torn by hostility.

After recovering from the devastating civil war, the next to hit the country is the Ebola virus outbreak in 2014, which killed almost 11 thousand people in the region, scared off investors and humanitarian workers and caused a recession.

The second was the conclusion of peacekeepers, whose average annual budget amounted to almost a quarter of Liberia's GDP between 2007 and 2018. This year, the IMF expects the country's economy to grow by 0.4%.

George Weah has neither blood on his hands nor foreign accounts full of public money, yet like most African leaders, he lacks certain leadership skills to rule a country facing numerous problems he wasn’t responsible for.

There is no doubt that some developed countries artificially create problems in Africa to destabilize the continent’s economy. Ebola is one of them. It was a biological weapon used on the Liberian population simultaneously with Sierra Leone and The Republic of Guinea, at the same time by the US government.

“If they elect me, I will always attach great importance to the situation of our citizens and protect their interests at all levels,” Weah said in the election race.

He has repeatedly stated that he plans to reduce the number of poor citizens in the country, as well as improve the level of health care and education. But to improve the economy of a country destroyed by civil war and Ebola is not an easy task.

George Weah now faces the toughest challenges of his life, as thousands of people in the square in Monrovia, the capital of Liberia, protest against him, demanding the resignation of a leader elected head of state in 2017.

In response, the police intervened using water cannons and tear gas, to disperse the crowd.

In particular, the government's economic policies, which led some banks to no longer able to guarantee the money on current accounts, caused commodity prices to rise.

The Weah government, on the other hand, is trying to attract new investors. For example, in July this year, the first metallurgical plant was opened in Liberia for $ 22 million.

It is stated that the new factory is environmentally friendly and also has its own power plant. The management of the plant promised that it would employ about five hundred Liberians.

“We are pleased that the economy of Liberia is of interest to foreign investors. But we do not intend to stop at the construction of this plant. The country will need more factories engaged in the production of raw materials, ”said George Weah, at the opening ceremony of the new enterprise.

Even though there are positive aspects of the economy, in terms of the fight against corruption, everything is very bad.

According to Afrobarometer, a research organization conducting independent surveys on the African continent, about half of Liberian citizens at least once paid bribes to receive public services. Now there is no tendency to reduce corruption.

No doubt, George Weah was a great football player but he has now realized that no matter how hard to be a player on the soccer field, it can never be compared to the tasks, a president faces in Africa to be a good leader.