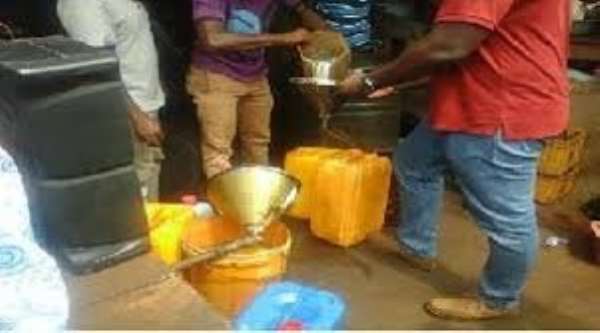 The Municipal Chief Executive (MCE) of Keta, Godwin Edudzi Yao is at loggerheads with the Vodza Landing Beach Committee over “illegal” sale of premix fuel.

The latter is accusing the former of mismanaging earnings made from the sale of the product.

The Keta MCE, Godwin Edudzi Yao had earlier letter, warned the committee against what he described as illegal pricing of the product above government subsidy, cautioning the Vodza Landing Beach Committee to halt the activity and report earnings to his office for auditing.

“Your action of selling the above product above the price has defeated the reason for which government is making the product available to our fellow fisher folk and farmers… I am cautioning you by this letter to desist from this unpatriotic behaviour forthwith before the law catches up with you.”, Mr Yao said.

Describing the development as “embarrassing and nauseating” which is “making government very unpopular”, the Keta MCE added that: “I am by this letter requesting you to immediately account for the amount that has accrued out of the illegal increase.”

But the Chief fisherman of Vodza Landing Beach Committee, Joshua Kwasi Agbezudor Kaleawo has in a letter, justified the increment in pricing, citing the need for internally generated funds.

“The increase of premix fuel from GHS525.00 to GHS550.00, a margin of 2.50p as internally generated funds to cater for unfortunate situation happening to us as fisher folk and the resolution to that effect agreed by the fisher folk,” Joshua Kaleawo said in a letter to the MCE.

Also, the committee’s Chief fisherman, in a strongly worded response believes the MCE’s request to render account to his outfit flies in the face of “the legislative instrument that established the landing beach committee.

“It is very unfortunate that I have come to you and render such an account at the first instance for the sake of honour, which you have extremely abused… I am obliged to render the proceeds of the sale of premix fuel in Vodza to the members of the landing beach committee and the community not you to the extent of rendering it at your residence,” he added.

Mr Kaleawo further stated that: “You have taken all the profit made from the sale of premix fuel on two occasions.”

The landing beach committee is also demanding that some GHS,4500 allegedly taken by the Keta MCE, Godwin Edudzi Yao and Elikem Kwasi Sewordor and other allies out of a GHS10,700 profit, be refunded with immediate effect.