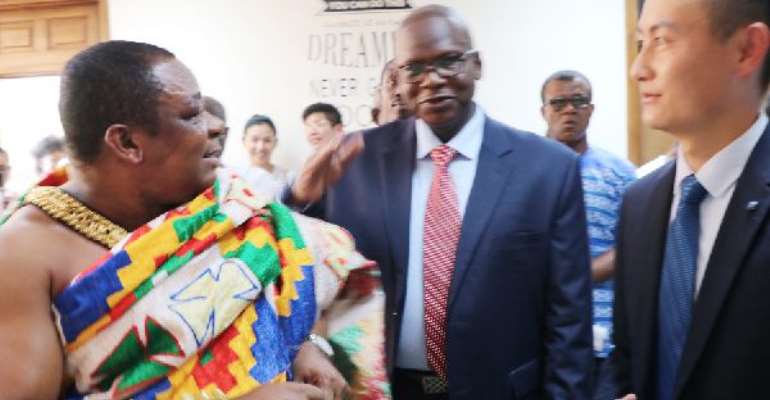 The President of the Ghana Chamber of Commerce and Industry, Nana Dr Appiagyei Dankawoso, has said Ghana's trade relations with China have been worthwhile.

Quoting data from the International Trade Centre, he said in 2018, Ghana's exports to China amounted to US$2.4 billion, surpassing other trade partners.

Speaking at the launch of the E-Tang Group Ghana Ltd, a subsidiary of Chinese printing giants, Shanghai KS, he said: “This demonstrates the commitment that both countries attach to trade and investment for mutual benefits.”

He added that though the figures looked impressive, the critical question to be asked of the FDIs was the sort of impact they had on business growth and development, as well as the quality of life of the people.

He said developments in the road sector, at least, pointed to a good impact, stressing also that Ghana-China relationship was essential to the stability of trade flows.

Nana Appiagyei Dankawoso said the two countries represented a good example of what could be achieved “when we walk side-by-side”.

While advising the Ghanaian workers at the company to work hard and grow the business into an international status, Nana Appiagyei Dankawoso also advised the management to treat the Ghanaian workers fairly, saying “pay them well just as you would do for your Chinese brothers back home”.

The Minister of Trade and Industry, Mr Alan Kyerematen, in a speech read on his behalf, has welcomed the E-Tang Group and said the company fit into the government's industrial policy, which was towards developing industries that were export-oriented with high value addition, high technology, high local content and having strong linkages with the domestic economy.

He said the company intended to be a market leader within a short time to enable it to enter neighbouring countries by the middle of 2020.

The Chairman of E-Tang Group Ghana and Shanghai, Mr Jeff He, said the company was the first to be empowered with fully localised operations, adding that all the employees would be Ghanaians.