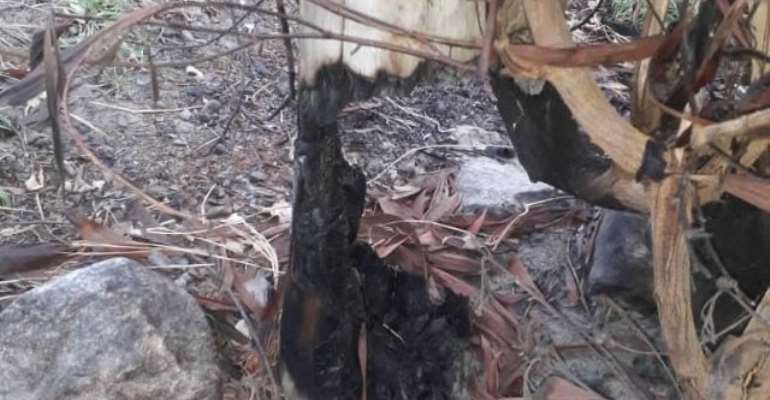 About 29 electricity poles belonging to the Electricity Company of Ghana (ECG) in Sogakope, South Tongu District, and erected along the sea defence stretch of the Keta-Havedzi road in the Keta Municipality, have been burnt by bushfires.

Twenty-one of them were high tension poles and the remaining eight were service ones. Some of them have been left hanging at knee level, posing danger to lives.

However, there have not been power interruptions in the area.

Mr Godwin Gone, Keta District Manager of the ECG, said the bushfires started on December 30, 2019, through to January 1, 2020. It took the intervention of firefighters, to tame it and he said the cost to the Company was high.

He said he was surprised at the occurrence because “there are no farmlands or thick bushes around Keta-Adzido and Kedzi-Vodza areas for people to burn bushes for hunting".

The District Manager described the incident as unfortunate and appealed to residents in the Keta Municipality to desist from the indiscriminate setting of fire to bushes during dry seasons, so as not to plunge the area into darkness.

Mr Gone urged the public to be cautious when setting fires during Harmattan periods because they could lead to unforeseen or unintended disasters with far-reaching consequences.

He said the company was taking steps to replace the burnt poles to make sure uninterrupted power supply to the people.

Mr Benjamin Obeng Antwi, Public Relations Officer, ECG, Volta Region, said the incident had been reported to the police and he was hopeful the culprits would be arrested and prosecuted.

He said ECG was creating fire belts around the poles and replacing some with steel tubular poles in the Volta and Oti Regions to avoid such occurrences.

Mr Antwi complained about, what he said was the increasing cases of cable theft in Keta, especially around the Nursing Training College and called for support from the public to arrest and prosecute the offenders.