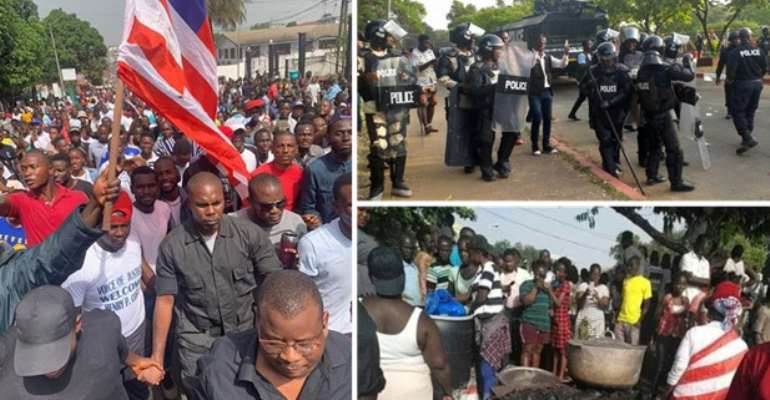 Statement of the NDC on Government Attack of Peaceful Protesters on January 6, 2020 and

Request for Investigation of Police Brutality

Monrovia, January 8, 2020 -- The National Democratic Coalition of Liberia (NDC), Liberia’s social democratic political formation, is deeply concerned about the excessive use of force by the Liberian National Police on peaceful protesters on January 6, 2020. In this regard, the NDC strongly condemns the unprovoked attack on unarmed peaceful protesters during the January 6th National Demonstration against the massive corruption and economic hardship instituted by President George Weah’s government. This brutal police action against peaceful protesters constitutes yet another human rights violation that should claim national, continental, and global concern.

Protesters had gathered on the grounds of the Capitol Building, expressing legitimate democratic demands for accountability and transparency from government, press freedom and free speech, and against bad governance and mismanagement of the country’s economy. Armed police then began firing tear gas and water cannon at peaceful protesters who were in the process of preparing food and snacks on public grounds for distribution to the gathering of protesters. The police has yet to find a justifiable reason for the use of such excessive force.

This cruel action on the part of the Liberian police demonstrates the tyrannical nature of the government, which President George Weah took over in a growing democratic atmosphere, but has now turned it into a brutal dictatorship.

In Liberia, just as in many African countries, it is customary for street vendors to sell food prepared with safe fire-grill or charcoal-pots on various public street side-walks. This has never been considered as a violation of any public or city ordinance. It is in similar light that some protesters outside the capitol building had begun preparing food and snacks, when armed police forcefully disperse the protesters with tear gas and high power water cannons. Several protesters were wounded, including women and children who were bystanders.

This brutality is a confirmation of the very bad governance and repeated constitutional violations against which the Liberian people were protesting on January 6th. It further confirms that during people’s civil actions and protests, it is the government that always provokes and initiates the violence which is later blamed on defenseless and peaceful citizens.

Also in recent times, armed thugs sympathetic to the Weah government have disrupted opposition political rallies, particularly during the recent legislative by-elections and during the recent student demonstrations. Furthermore, former rebel-combatants sympathetic to the Weah government have openly threatened to kill anyone protesting against the government. Given our past history of a brutal 14-year civil war, the NDC is gravely concerned about the threats and presence of former rebel Generals (ex-NPFL rebel General, Siaffa Namah; ex-LURD rebel General Ophorie Diah; and Ex-ULIMO-J rebel General, Augustin Nagbe, aka “General Power”) who were allowed to passed security check-points and maintained an intimidating presence among peaceful protesters on the site of the January 6th protest.

On account of the foregoing, the National Democratic Coalition (NDC) calls on the Weah government to conduct an impartial independent investigation into the use of excessive force by the Liberia National Police on peaceful protesters as well as investigate the threats and presence of Ex-rebel Generals at the peaceful protest on January 6th.

At this juncture, the National Democratic Coalition (NDC) thanks our international partners for their role in maintaining peace in Liberia. The NDC calls on all peace-loving nations of Africa and the international community, particularly the US State Department, US Senate Committee on Foreign Relations, the European Union, the African Union, ECOWAS and the MRU, to arrest the latest Liberian government’s brutality against peaceful citizens. Also, the NDC encourages the Weah government to pay urgent attention to the bad governance and increasing economic hardship which is the fundamental cause of escalating tensions in Liberia.

The Liberian people deserve better and want peace, and it is the constitutional responsibility of the government to ensure peace and security for the people, instead of unleashing violence against peaceful citizens. We call for Unity among all Liberians.

Issued by Mandate of the Executive Committee of the National Democratic Coalition of Liberia (NDC); Done on 8th January 2020