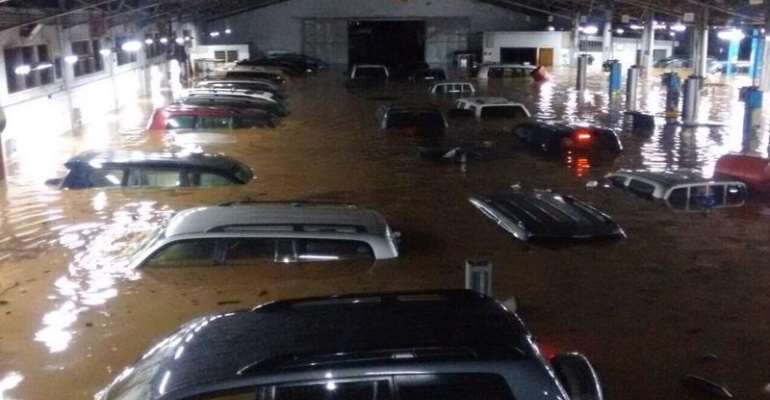 June 4, 2015, is a day Ghana will not forget. A day when heaven and hell visited Ghana; precisely Kwame Nkrumah Circle, Accra. Testimonies across the length and breadth of the country bear witness to the unprecedented event of the above date. The unloved friend of all; Death, had no option than to accommodate hundreds of poor and innocent souls into her abode. And, one may ask, what was the cause of such a disaster? The answer is simple; flood. May the souls of the faithfully departed souls rest in the bosom of the Maker. Amen! Yesterday, it was annual and biennial floods. Due to much talk and less work, today we have awarded her a higher adjective –Perennial Flood.

This piece seeks to state some causes and effects of this blessing (rain) which unfortunately has resulted into havoc and possible remedies that can aid in mitigating the perennial flooding situations across some sections in the country.

To commence, the spillage of both Bui and Bagre Dams. It is an established fact that there is the need for the spillage to occur in order to have the required volume and to prevent the dam from failing due to the rising water level in the dam caused by excessive rainfall. Consequently, the aftermath of the spillages results in flooding of these environments. The effects are usually disastrous; loss of lives, destruction of homes, properties and submerging of crops.

Also, constructions along waterways. When few private developers and influential individuals buy their way into constructing mansions and factories along waterways, the end result is that the water only needs to meander through a different channel. And, this inevitably results in flooding. The effect is seen when homes are flooded. Gadgets and other valuables are affected. Also, death does hover around and occasionally carries a person or two along.

Furthermore, poor attitude of citizens is a factor that cannot be overemphasized. People patronise plastic products and eventually dump the plastics into gutters and water bodies. Consequently, gutters get chocked, flood and cholera get attracted and eventually people end up at the hospitals.

Nevertheless, the nature of our partisan politics is a factor which has caused the annual flood to be garnished as perennial flood. The lip service is too much. And once a party is in opposition, sometimes, good projects of the government in power are seen as inimical. Subsequently, government in power will turn to forget such a pressing need and rather focus on dancing around the problem. Before long, a year is gone and the rain is with us again.

So far, we have been looking at the causes and effects of flood across some parts of the country. The following points will take into consideration some mitigation factors that can help reduce the flooding situation to the barest minimum.

In the first place, a mini dam or reservoir should be constructed around Bui and a channel created to receive the spillage from Burkina Faso so that when the spillage occurs the water will be collected. It is very ironic that the environments that experience the flood from the Bagre Dam spillage from Burkina Faso also do experience droughts. So, what prevents Government from putting in mechanism to curtail loss of lives?

Also, town and country planners and Assemblies should be empowered so much so that they will deal with individuals who seek to buy their way into building along waterways. Because of square pegs in round holes, few individuals have no option than to buy them off. Therefore, Government would be better off in ensuring that the interest of the country is sought first by employing qualified people to work for Mother Ghana.

In addition to that, public education is key. No Government can succeed without the citizens. Therefore, there is the need for the Government to make use of the media to educate the public about the consequences of some of our actions and inactions. Once those living in slums even see the need to keep their ambient clean, then, we are making a head way.

Besides, a system should be put in place to stop a party in opposition from destructing the work of the Government in power. In order words, there can be a five-year development plan or project and even should there be a change of Government, the new one should be obliged to continue it.

Beside the above, the various plastics choking the gutters can be recycled into countless products. Surprising enough, there will be job creation and revenue for the country.

In furtherance, the Government can put-up low-cost houses for the people at the northern sector of the country who suffer both droughts and floods in a year.

Nevertheless, just recently, the University of Cape Coast was visited by the flood. Students of the University of Education were no exception as those in "hostels" had a fair share as a result of inadequate accommodation on campus. Therefore, it is time to call our engineers to consider bigger drainage systems across the country.

In conclusion, I commend the efforts of the Ghana Meteorological Agency and the National Disaster Management Organization, (NADMO) for the works they are doing. However, since we need all hands-on deck, I call on Non-Governmental Organizations, Philanthropists and other agencies to come on board. The recent torrential rain at Upper East Region has rendered many folks homeless beyond the assistance of NADMO. And as usual, death has laid her icy hands over of twenty-six lives. I look forward that we will all join hands to end the perennial flood across the country.