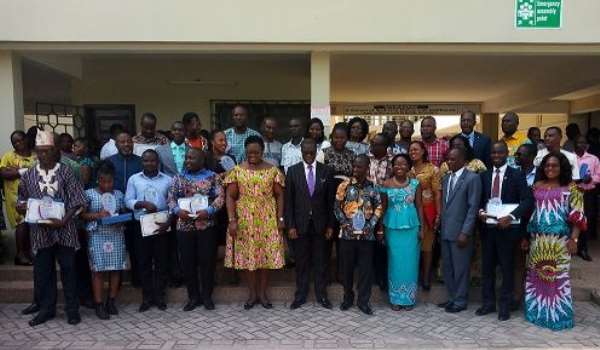 Seventeen hardworking staff of the University of Cape Coast (UCC) have been awarded for their meritorious contribution to the development of the university.

The awardees each received a plaque, a certificate and GH3,000 cash.

Eschew work ills
The Vice Chancellor of UCC, Professor Joseph Ghartey commended the awardees for their exemplary performance in their different areas of endeavor.

He advised all workers to strive for excellence and to eschew all acts that negatively impacted on output including absenteeism, laziness, lateness and indifference and support the development of the university.

Prof Ghartey Ampiah noted that this year’s nominations were 76 more than twice the 36 received last year.

He said the number of awardees whichwas 10 last year saw an increase of seven this year and urged the awards committee to work to expand the awards to award many more hard working staff.

Awardees
Ms Dankwah who spoke on behalf of the awardees thanked the management of the university for the recognition and pledged their commitment to work even harder.