Signing Of Performance Contract: Managers Of SOEs Cautioned Against Wastage 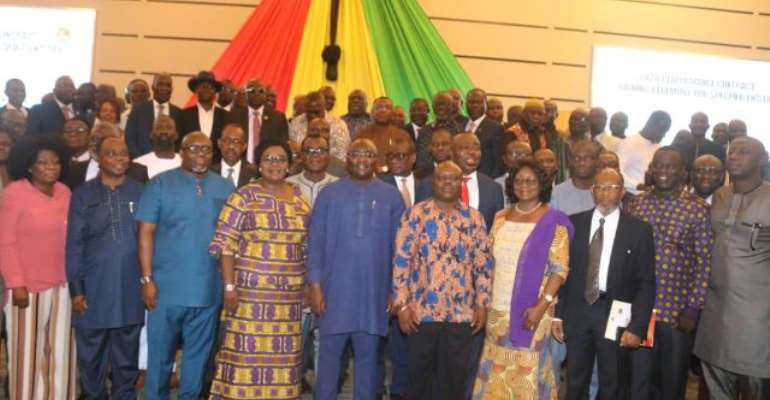 Disturbing details emerging from some specific entities under the State Interests and Governance Authority (SIGA) reveals that some state-owned enterprises are riddled with huge legacy debts as others are also losing business focus engaging in activities which are not their core line of operation.

To this end, management of SIGA has taken some drastic steps including possible jail terms for heads of State-Owned-Enterprises (SOEs) who breach laws and agreements this year. Putting it bluntly, Director General of SIGA, Stephen Asamoah Boateng lamented that most SOEs have lost focus hence the need to introduce some drastic measures to ensure productivity.

“We have departed from the SEC era where non-compliance did not mean anything, this time there are heavy penalties ranging from refusal to grant bonuses, financial charges, through to recommendation to appointing authority to remove Management and Board of Directors and, prosecution leading to court fines and jail terms,” he stated.

Meanwhile, Vice President Dr Mahamudu Bawumia has charged heads of SOEs to embrace digitization as a means of dealing with the scourge of corruption. Taking his turn at the signing ceremony, Dr Bawumia explained that government’s digitization will go a long way to improve upon the productivity of State-Owned Enterprises (SOEs).

“As boards and management, you should know that the global economic environment is changing at a fast pace and as leaders, you need to be circumspect and develop the ability to look ahead and evaluate the consequences of those changes on our State Entities and plan for them. You need to apply the current trends in ICT resources and deploy them to inject efficiency in your operations,” Dr Bawumia stated.

So far, over 40 State-Owned-Enterprises signed the performance contract and are expected to rake in close to GH¢2 billion by the end of the second quarter of 2020.

Avoid greed, dishonesty and hypocrisy in galamsey fight – As...
59 minutes ago