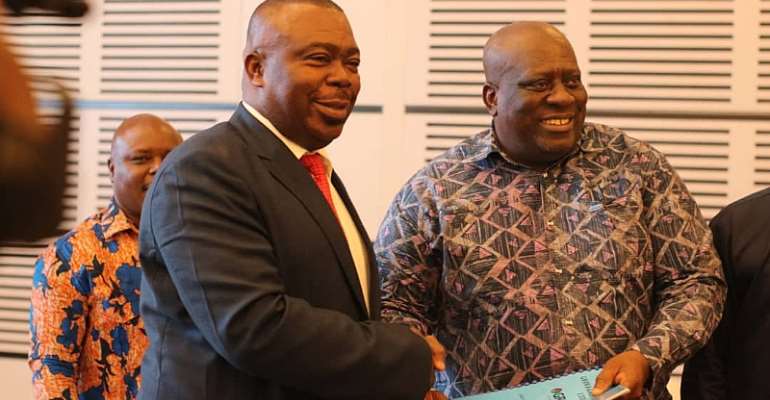 State Interest And Governance Authority (SIGA) has pledged its support for State-Owned Enterprise (SOEs) and JVCs on the international market in order to achieve their goals.

In a speech delivered by the Director-General of SIGA, Hon. Stephen Asamoah Boateng, said, SIGA will not relent in this effort.

"I want us to set the target of growing some of our businesses and other entities into Global Giants, beginning with the venturing out in the West African market".

Speaking on the theme "Transforming State Entities To Contribute Significantly Towards “Ghana Beyond Aid", at the 2020 performance contract signing ceremony for specified entities, Hon. Samuel Asamoah Boateng said SOEs were established to bring in money to drive the economy of the country.

He appealed to Ghanaians not sit passively and only criticize when State Entities do something wrong, rather they must take an active interest and participate in shaping them to deliver.

He stated that SIGA is here to lead the change and work with SOEs and other entities to achieve the 'Ghana Beyond Aid' agenda.

He further stated that SIGA will be proactively working to get the government to recapitalize Enterprises that shows real leadership to turn around their fortunes in the shortest possible time.

"Some SOEs will be divested and others put forward for private sector participation with an emphasis on involving the general Ghanaian public through the Stock market", he said.

SIGA was established in June 2019 with the passage of the SIGA 2019 (Act 990); after the repeal of the State Enterprise Commission (SEC) and Divestiture Implementation Acts (DIC Acts).

State Interest and Governance Authority (SIGA) was established to address the issues of the poor aggregate performance of state own enterprises, weak governance structure and low returns to governance, among others.

SIGA was set up to data on all Specified Entities and shall carry out vigorous monitoring of every entity that is signing the Contract.

SIGA also aims at developing the Regulations for the SIGA Act. This is meant to fill in the gaps in the law as well as to better empower the Authority in its day to day operations.

SIGA would also provide the platform to consumers and other Stakeholders of our State Entities with the view to improving their performance.

The report stated that some other institutions could not complete the whole process due to huge legacy debts which hindered their smooth operations. It also revealed quite a number of the entities are not able to honour their statutory obligations causing all sorts of unpleasant public discourse and headline news. A sizeable number have also lost business focus and have indulged in activities which are not their core operation.