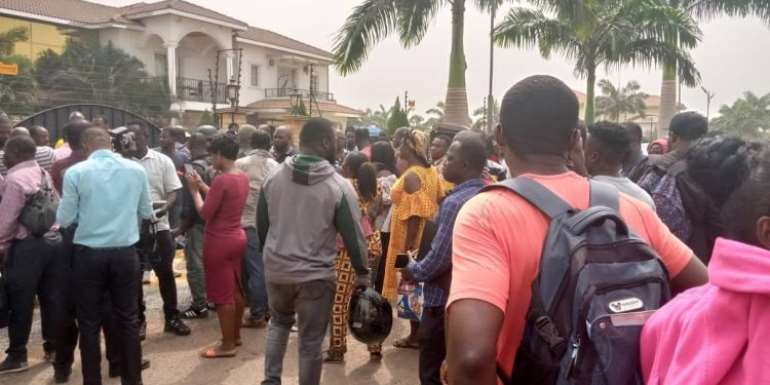 Some Menzgold customers who were arrested Wednesday for massing up at the Trassaco residence of the company’s Chief Executive Officer (CEO), Nana Appiah Mensah aka NAM1, are struggling to meet bail conditions for their release.

About 90 of the customers were arrested by the police for trespassing, unlawful entry and causing injury to the security detail at the Trassaco estate.

The customers were at the residence of NAM1 to demand their locked-up investments.

Police officials from the Accra Regional Command claimed they arrested the customers to maintain order at the place.

Speaking on Eyewitness News on Wednesday, spokesperson for the Coalition of Aggrieved Customers of Menzgold, Francis Owusu said “as we speak now they [police] have granted us bail but we are to provide one surety each before we will be allowed to go. So we are still stranded here looking for relatives and friends to come and help us secure our bail.”

What happened at NAM1’s residence?

According to reports, the customers after marching to the Trasacco gates were denied entry by the security personnel at the gates.

The customers were said to have overpowered the security personnel and entered the premises after which the police came in to restore calm.