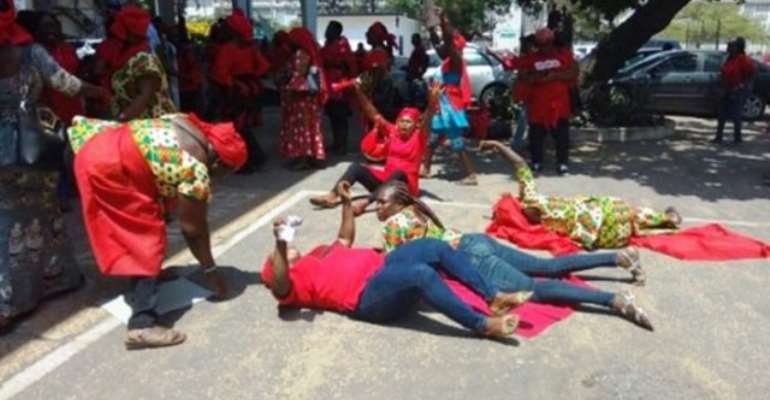 Angry caterers under the Ghana School Feeding Programme (GSFP ) on Wednesday night besieged the residence of President Akufo-Addo in Nima over what they say is the refusal of government to pay their arrears.

The women who throng the president’s residence with their mattresses and pillows say they are willing to sleep over if assurances are not given to the effect of getting their concerns addressed.

“I brought my mattress and pillow. We are waiting for Morrison [Cynthia Morrison] in front of President Akufo-Addo house. We are suffering,” one caterer said.

The women are blaming the Minister for Gender, Children and Social Protection, Mrs Cynthia Mamle Morrison for turning a deaf ear to their plight. Some of them also said they were being pressured by banks to service loans borrowed to pre-finance activities under the initiative.

One of the aggrieved caterers described it as unfair feeding children under the programme while her family bears the brunt.

“How can I be using my money to cook for other children when my children starving. My payment has been delayed for one and a half years. They claim there was a mistake in the figures involving my payment.” The visibly distraught woman said.

She further added that: “It is not the fault of the President. He should sack the minister... She has never convened a meeting with us since she assumed office. Everyone is afraid to call her out for fear of stigmatisation.”

Another caterer expressed worry over a mistake, she claims, was made in the issuance of her e-zwich card which is yet to be rectified months after her complaints, leaving her without her funds.

The Auditor-General’s Report in 2018 revealed several financial irregularities and multiple registrations as well as ghost schools, leading to huge financial losses to the state in the management of the programme.

The report blamed 81 Metropolitan, Municipal and District Assemblies (MMDAs) and the management of the programme for the mismanagement.

It also accused the 81 MMDAs of declaring only GH¢194,383.00 from an amount of GH¢1.09 million purportedly realised from the sale of 21,880 application forms sold to caterers who applied for contracts.

As much as GH¢899,617 from the sale of application forms is unaccounted for and has been outstanding since 2017.

After minutes of lamentation, the picketing caterers were later forced by the police to discontinue their action, citing lack of prior notification for the demonstration.

They have however vowed to seek the necessary clearance to resume their action on Thursday.