Watch Out For Ex-President Mahama’s NDC Tribal Politics, Too! 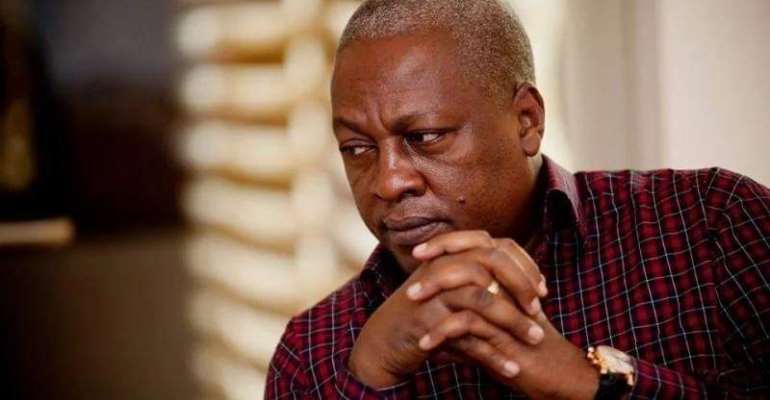 First, let us spare ourselves of descending into pretentious innocence; and rather call it the way it is: That the country’s major opposition party—National Democratic Congress—is in the iron-clad hands of ex-President John Drama(ni) Mahama (JDM). Moreover, let’s also know that the NDC today has been craftily hijacked from its bona fide preeminent founder Mr.JJ Rawlings. The culmination of this development is that the party is now placed at the beck and call of the NDC’s presidential flag bearer—Mr. J.D. Mahama and his “hosanna” cabals.

The combination of the aforementioned explains why anytime Mr. Mahama or any of his staunched cheerers within the party’s hierarchy speaks about their violent past, all peace-loving Ghanaians must take serious notice. For not only is Mahama-controlled NDC perfect the act of crowd exploitations, but also the “umbrella” group’s attitude toward power is grounded in the single-minded outlook that the “end justifies the means.” Whatever means Mr. Mahama can use to wrestle power, so be it.

Thus, in his infamous destabilizing “boot for boot” speech, former President John Drama(ni) Mahama impudently revealed to millions of Ghanaians about his party’s inbred violent capabilities or innate propensities of his party to sociopolitical disorder. According to Mr. Mahama, the political party he first became head by a tragic accident of history, and now has more or less fallen under his sole control, was reportedly formed out of violence. By JDM’s chilling recollection, therefore, no any other political entity in Ghana can rival his NDC, “when push comes to shove.”

For sure, the NDC’s flag bearer is correct that the party he has self-servingly snatched from its founding father (ex-President Rawlings) has violence pedigree, stretching back to the P/NDC era in the 1980s. Interestingly, however, Mr. JD Mahama forgets or fails to mention one intrinsically notable characteristic or game plan of the NDC; and, that is its proneness to tribal politics.

Indeed, besides perpetrating rumors of instability, threats, or actual acts of planning social chaos, the country’s main opposition party is well-versed in playing tribal politics. All the reasonable-minded citizens who would open their ears and eyes quite clearly, may notice former President Mahama and his campaigners rounding around the country and accusing the ruling New Patriotic Party (NPP) as a tribal political party that does not genuinely welcome other Ghanaian ethnic groups except some selected people from Akan extraction.

In fact, some Ghanaians have been playing tribal politics for decades; pushing tired-old narrative that the UP/NPP tradition is basically an “Akan” centered, and in the process, these false narrators often pit the northern brothers and sisters against their kinfolks in the south of the country. To that end, Mr. Mahama and his campaign surrogates will definitely use the Vice President Dr. Bawumia as a poster boy in their tribal politics messaging in 2020.

As usual, Mahama-led NDC will go every length to intensify the desperate effort to trivialize the vice president’s position/role within NPP, and attempt to create doubt among the vulnerable Ghanaians that the party of President Akufo-Addo is incapable of taking other brothers/sisters from the north, seriously. Here again, Vice President Bawumia, especially, will become the NDC’s cannon fodder in the flawed and cynical viewpoint that NPP is only “using” the nation’s current second-in-command for political expediency.

The assumption that NPP is “using” Vice President Dr. Bawumia or any “northerner” brother/sister solely for tribal/regional balance purpose can only come from people with limited grasps of critical thinking or true appreciation of contemporary democratic party set-up. How can any individual rise through the ranks of an organization to become the second-highest ranking officer and somehow be seen as a mere dispensable power player? Besides, in all veritable democratic establishments, members are not crowned with titles within the organizations, but positions are keenly contested for. That is the beauty and essence of democratic ideals—free competition of ideas and healthy contest.

For one thing, too, Dr. Bawumia is politically and economically savvy and nimble as a cat around the mouse holes irresponsibly left unsealed by former President Mahama’s NDC. On top of that, it is obvious JDM-hijacked party harbors some remnants of anger, begrudge, and also hidden admiration for the current vice president. Because many of us are yet to see this present NDC coming out with any credible intellectual economic heavyweight who can stand toe-to-toe with Dr. Bawumia’s quick-witted economic analysis and coherent communication of issues of national importance.

Absence of the foregoing, it will not be surprising to hear Mr. Mahama and his hangers-on calling President Akufo-Addo’s number-two man “Wale Wale Adam Smith, Bawuliar” and other scornful accolades in that the NDC presidential aspirant simply does not have the manpower match capable enough for the economic prowess of the former United States university professor and now Ghana’s VP Dr. Bawumia.

From now onto the general elections time in December this year, former President Mahama and his NDC wild “pit-bulls” will be trailing Dr. Mumuni Bawumia everywhere he goes. His campaign speeches, as well as his public policy analyses, will be childishly twisted and some of them used as tribal weapons. For instance, Mr. Mahama will let loose some of his “privileged educated class” from the north and even from across some parts of the country to seize on any legitimate criticism of ex-President Mahama by Vice President Bawumia as self-inflicted family attack on a “northern kinsman” that is remotely-controlled by the NPP people from the south.

Like all tribal rigmaroles or politics, the perpetrators tend be inward-looking or uninformed about the fact that at the core of human nature is some elements of tribal sentiments and the same time social instincts. Our social nature suggests we need each other for survival and advancement. Hence, we cannot or it is not in our interest as humans or for any group of people to be monolithic in practical sense. In the same vein, Dr. Bawumia as a human being first, Ghanaian second, and if anyone will like to put a vague label on him as “northerner” will still not in any way mean brothers/sisters from the northern parts of Ghana must behave or think one-way or belong to a particular political tradition.

In short, as the political campaigns gather momentum for this 2020 general elections, Mr. Mahama and his tribal politics proxies will likely call out any of their opponents with “northern” lineage who dares criticise the NDC’s flag bearer as “head-butting stooge” being used against a fellow brother/sister from the north. The vice president will bear the worst part of this tribal politics abuse because Mahama-run NDC knows Dr. Bawumia is matchless communicator and one of the very few crown jewels of the ruling NPP who keeps giving former President Mahama and his incoherent campaign team nightmarish political experiences!