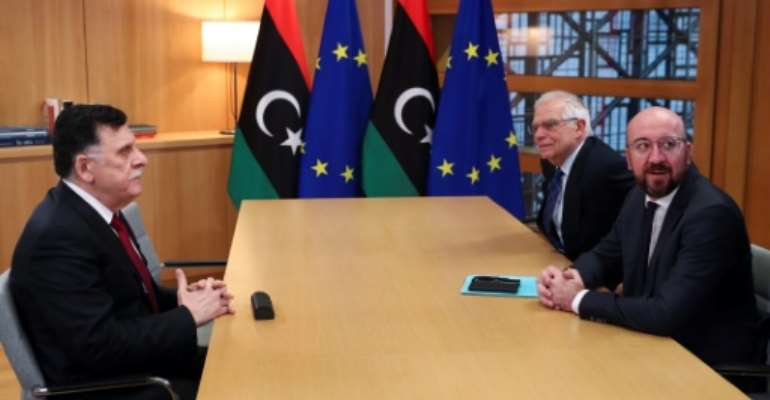 EU leaders met the head of Libya's UN-recognised government Wednesday as they scramble to contain the escalating crisis there, with Germany warning the country could deteriorate into a "second Syria".

Fayez al-Sarraj, whose beleaguered Government of National Accord is facing an offensive by rival forces who control the country's east, met EU diplomatic chief Josep Borrell, who cautioned that Libya was facing a "watershed point".

He also met EU Council President Charles Michel and German Foreign Minister Heiko Maas, who told reporters that "we want to prevent Libya from becoming the scene of a proxy war or Libya becoming a second Syria."

Borrell's and Maas' warnings came after military strongman Khalifa Haftar's forces -- who have support from the UAE, Egypt and Russia -- seized control of the coastal city of Sirte as part of his drive to take Tripoli and oust the GNA.

The EU pledged to "step up efforts towards a peaceful and political solution" in a statement released afterwards, hoping the so-called Berlin process -- UN-sponsored talks planned for the German capital -- can offer a way out.

Maas, who a day earlier took part in emergency talks on Libya with his French, British and Italian counterparts, said Sarraj had given his full support to the Berlin process and pledged to "push ahead with what is to be agreed there -- both a ceasefire and an arms embargo with the neighbouring states, but also above all the political process under the aegis of the United Nations."

No date has been fixed for the Berlin conference, but Maas suggested it could happen in the coming weeks.

Borrell, who on Tuesday condemned Turkey for "interference" in the Libya conflict, earlier in the day warned that the situation in Libya was becoming increasingly perilous.

Michel is due in Turkey this weekend for talks with President Recep Tayyip Erdogan, while Borrell plans to meet other Libyan leaders including Haftar in search of a breakthrough.

Ankara says it has sent 35 Turkish troops who are carrying out training and coordination tasks to support the GNA, insisting they will not take part in any fighting.

Libya has been plunged into chaos since a 2011 NATO-backed uprising that killed longstanding dictator Moamer Kadhafi, and is now divided between the GNA and Haftar's rival authorities based in the country's east.

Tensions escalated last year when Haftar launched an offensive to capture Tripoli and the conflict is complicated by the involvement of outside forces including the UAE and by Russian mercenaries backing the strongman -- though Moscow denies playing a role.

The EU is keen to stop the conflict spiralling out of control, fearing that terror groups such as the Islamic State could exploit the instability to launch attacks and concerned the turmoil could lead to more migrants trying to cross the Mediterranean.

Elsewhere, Libya was on the agenda as Russian President Vladimir Putin met his Turkish counterpart Recep Tayyip Erdogan in Istanbul.