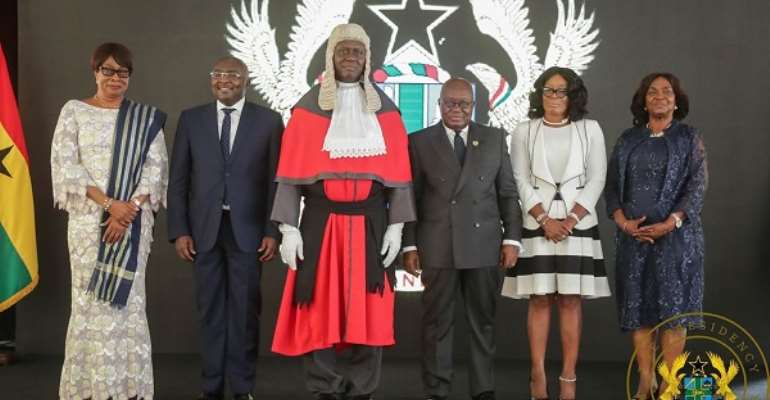 President Akufo-Addo on Tuesday confirmed Justice Kwasi Anin-Yeboah as Ghana's highest judicial officer. By this confirmation, the respected justice becomes the 14th Chief Justice of the Republic of Ghana.

The investiture took place at the Jubilee House and was punctuated with three oaths viz----the Oath of Allegiance, the Judicial Oath and the Oath of Secrecy.

In his address the president observed that almost all Justices of the Supreme Court that attended the vetting of the Chief Justice by the Appointments Committee of Parliament, were present, describing it as an 'admirable gesture'.

“I am hopeful that this same level of support will be forthcoming as he assumes the mantle of the Head of the Judiciary. To his colleagues on the bench and members of the Bar, I urge your continued solidarity and corporation with the new Chief Justice to promote the rule of law. That will be in line with the finest traditions of the Bench and the Bar and will help enhance the welfare of our people,” the president stated.

But would solidarity be enough?
Certainly not. Solidarity among other things can help realise the President's expectation.

So, it goes beyond that. The judiciary must fully enjoy its independent status without any interference whatsoever from the three arms of government, particularly the executive.

More so, it's head, the Chief Justice must get the full support of the president. They say, a friend in need is a friend indeed. And every need has got ego to feed. The judiciary as an institution has many needs to meet and until perhaps those needs are taken care of the President's call for decency, discipline, fairness and deep-seated respect for the rule of law will be an illusion.

Allusion
Who else knows the judiciary better than President Akufo-Addo?

He's arguably the best man who knows it all about this honourable institution. He's well aware and knows how dire the situation is. Indeed, he alluded to that necessity element in his address and assured the Chief Justice that the most pressing needs of the Judiciary such as their infrastructure challenges which directly affects the delivery of Justice in Ghana would be given the needed attention it deserved from the government.

The 'Saints' & bruised image
Unquestionably, the Judiciary in Ghana has long been viewed as an enviable institution.

It commands respect and treads the streets with its shoulders high--- until a few years ago when it was hit by bribery/corruption allegations. Demons dance when the righteous falls. May the four-legged trespass not the corridors of the noble. Of course no one knoweth the truth. Only his Maker knows the truth or otherwise. And I think it was this perceived bruised image that informed the president to admonish judges in Ghana to live above reproach.

“it is vitally important that we have judges who are honest, possess integrity and sound knowledge of the law," Mr. Akufo-Addo said.

He, therefore, charged the Chief Justice to ensure that during his term in office, the Judicial Service can confidently be said to be such.

Is the president asking for more and what does the Judiciary get back?

Remember, we've various institutions in the country that lack basic needs or the wherewithal to deal with day to day challenges.

The police, SFO, EOCO, KwasiPeter (SP) and many more are all under-resourced.

And my fear is that, if we don't build strong institutions, and provide them with the needed support-- technical and financial all the talks will come to naught. In short, we should walk the talk.

“I assure Chief Justice Anin Yeboah that I will be a trusted partner of the Judiciary so that the Executive and the Judiciary can co-operate in the spirit of mutual respect to promote Good Governance for the advancement of people” the President opined.

“I want to assure the people of Ghana that I will continue to jealously guard the integrity of the Judiciary as my predecessors in office have done. I will take all necessary steps to ensure that during my term in office, solutions are found to these issues of concern,” Justice Anin- Yeboah underscored.

Mr. Anin-Yeboah is known for his knack for excellence. He also exudes decency, integrity and honesty.

He was appointed to the Supreme Court by President John Kuffour on the 11th of June 2008.

Days leading to the announcement, Paul Adom-Otchere, journalist and host of Good Evening Ghana' a MetroTV prime-time programme had said that Mr. Yeboah's final verdict on the 2012 Election Petition could influence the President's decision.

In that landmark ruling Justice Anin-Yeboah said this and I quote: "I will therefore, grant the relief One, in view of the evidence led, and decline to grant the relief two. I however, as consequential order, I will order the Second respondent (EC) to organise an election to select a president, as I cannot rely on an election which was seriously fraught with the malpractices, irregularities and statutory violations proved in this petition to declare the first petitioner as duly been elected."

And yesterday that dream, that hope, perhaps that nurtured expectation of every judge or justice became a reality. Mr. Anin-Yeboah a Supreme Court Judge now replaces Mrs.Sophia Abena Akuffo who retired on 20 December 2019.

Thus he becomes the 5th successive CJ appointed by the NPP after Justices Edward Kwame Wiredu (2001-03),

Since Independence, Ghana has had 13 chief justices two of them women.

Article 144(1) of the 1992 Constitution provides that the Chief Justice shall be appointed by the president acting on the advice of Judicial Council in consultation with the Council of State and with the approval of Parliament.

Justice Anin-Yeboah, a well-seasoned law enforcer, was appointed to the Supreme Court by former President John Agyekum Kuffuor in June 2008. He had also served as a Justice of the High Court, and a Justice of the Court of Appeal.

In addition, he was a part-time lecturer in Civil Procedure and the Ghana Legal System at the Ghana School of Law.