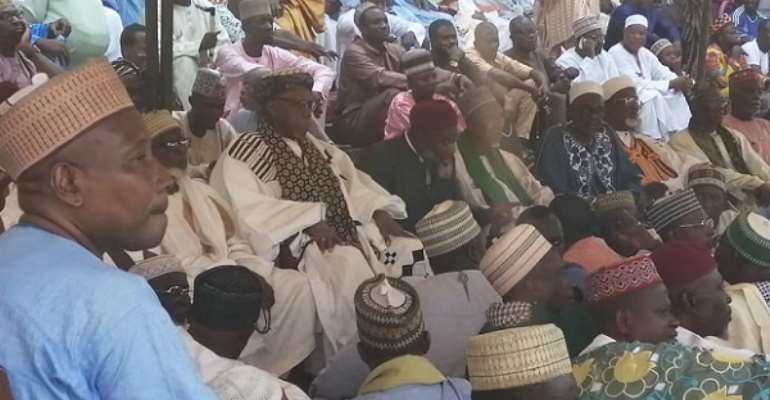 A section of the Muslim clerics praying for President Akufo-Addo

Scores of Muslims in the Ashanti Regional capital, Kumasi, have assembled and prayed fervently to Allah to help the ruling New Patriotic Party (NPP) to win this year's elections to retain power.

Alhaji Ali Suraj, the ex-NPP USA Organizer, who is the main architect of the spiritual exercise, stated that the NPP administration had delivered and deserved another term. According to him, every sector of the state has experienced massive transformation so far, which is a clear indication that the NPP government deserves a second term.

He, therefore, told DAILY GUIDE that he personally organized the Muslim prayers to help the NPP administration win the upcoming polls. He said virtually all the top Muslim clerics, imams, sheikhs and other staunch Muslims in Kumasi attended the maiden prayer exercise.

He disclosed that the programme, which took place at the Central Mosque in Kumasi, saw Muslims who used close to five hours to pray for victory for the NPP in 2020. “We prayed fervently for Allah's guidance, blessings and protection for President Akufo-Addo, Vice-President Dr. Mahamudu Bawumia and other government officials,” he said.

Alhaji Ali Suraj noted that the spiritual exercise would be done annually, adding that his main objective is to ensure Allah's blessings for the NPP government.

The Council of Zongo Chiefs led by Sultan Umar Farouk, Imam Abdul Wadud Ciessey, Council of Ulama and Imams, led by Imam Abdul Mumin and others turned up.