Re-Enacting The Culture Of Indiscipline 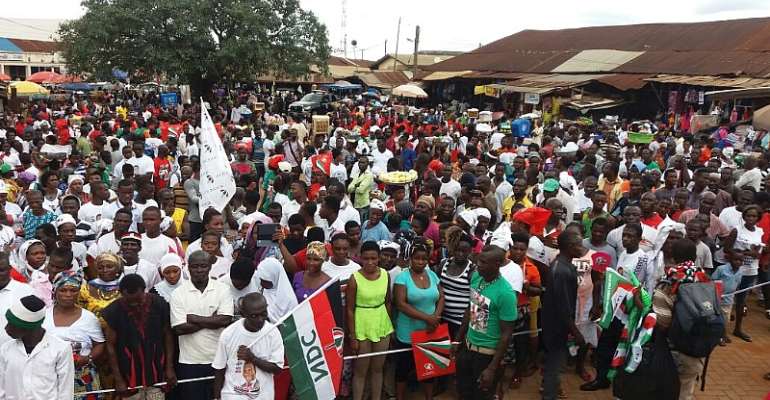 The culture of indiscipline is a hallmark of the opposition National Democratic Congress (NDC), the origin for which moral deficiency is not far-fetched.

As something ingrained in their political DNA, violence and indiscipline were inherited from the days of the so-called revolution when the rule of law was expunged from our governance schedule. Their constant reference to the unenviable pedigree during their secret meetings and which they intend visiting on the country as announced by them is an interesting development.

Using fear tactics to have their way as they have done over the years cannot hold in a decent society which Ghana is today. The days when women could be stripped naked and whipped by rogues acting upon the directive of the junta are long gone.

Their plan to invoke the spirit of the now archival acts of indiscipline in the streets of Accra to kill the exigent need for a new voters' register does not only trigger derision, it also smacks of crudeness of the underworld.

There is something about the voters' register which makes them panic when the necessary and smart innovations which would definitely take place pop up in the media.

It is not surprising that their party is heeding the call by Elvis Afriyie-Ankrah, their Director of Election, for a countrywide spate of demonstrations which they intend to degenerate into patches of lawlessness to stop Ghana from getting a new voters' register.

Demonstrations are allowed in democratic dispensations such as we have prevailing in Ghana. Today, unlike what happened when a man taking part in a demonstration during the tenure of the NDC lost his eye, people can protest without any fear of being whipped and treated like livestock; protesters are assured of protection provided they do not make good their plan to attack the Electoral Commission (EC).

With weak and unconvincing premises to push their demand for non-implementation of the important changes required to give us a new register, they think rogue tactics can.

With our memories intact, we do know that the previous chairperson used an amount of money for her limited registration exercise in excess of what the current administration intends using for the replacement of the roll of voters.

The EC, as an independent body, decides what in their estimation would ensure that the outcome of elections is the true reflection of the people's wish.

The NDC had their way under Charlotte and the bloated voters' register full of blemishes was not changed because that inured to the interest of the party. Unfortunately regardless of that, the outcome was humiliating for them.

Nobody can take over the streets of Accra with lawlessness as the NDC, as their Director of Elections is demanding of his party leadership. Demonstrations shall always be told the police who would give the directions to follow. Failure to abide by the directives could result in reactions in accordance with the law. This is standard practice and the NDC applied to the letter when they were at the helm.

Hiring hoodlums to storm the nation's capital because of a necessary new voters' register will not be acceptable.

While some think the fuss is all about the efforts they put in to encourage a cross-border registration of unqualified persons in previous times, others think because they are used to the behind-the-scene tampering of voter registration a heightened apprehension has gripped them as they dread their inability to do same any longer.

We take consolation in the fact that the EC is being managed by a group of Ghanaians who understand the electoral process and would, therefore, do all they can to ensure that polls are raised to the highest bar regardless of fear-mongering the NDC intends to employ.

Don't succumb to pressure to support LGBTQI agenda – GMM to ...
36 minutes ago