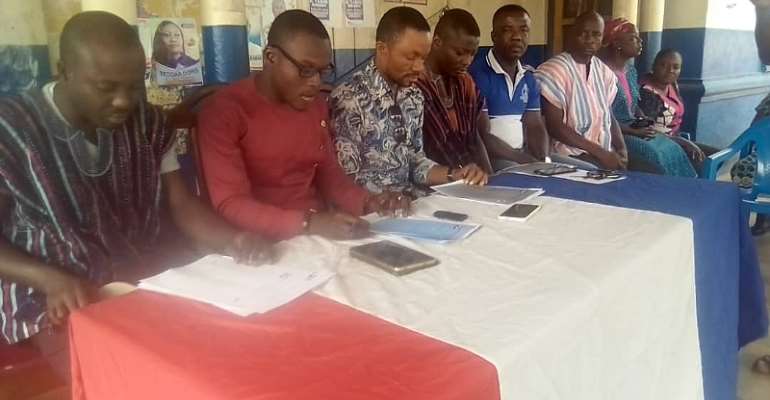 Concerned Electoral Area Coordinates and Polling Station Executives of the governing New Patriotic Party (NPP) in the Sunyani West constituency have expressed their worry over the activities of the Municipal Chief Executive (MCE) of the area, which is destroying the party’s electoral fortunes.

They said Sunyani West constituency which used to be one of the most peaceful and united is now at war and divided since the assumption of the Municipal Chief Executive (MCE), Mr. Martin Obeng.

“We are in power but still feeling the characteristics of opposition as a result of the activities of our MCE” they stated.

Speaking to newsmen at a press conference held at the party office, Nsoatre yesterday, Mr. Clement Boasiako, the Spokesperson for the group said the MCE has distanced the government from the party.

“Prior to the district assembly elections, the constituency Executives approached us to select suitable candidates for the said elections by the traditions and virtues of the NPP. After the party has gone through all these Democratic dispensations to select candidates, the MCE on the other hand also did his selection against the will and directions of the party” he said.

According to him, Mr. Martin Obeng also sponsored NDC candidates financially at the expense of the party candidates.

He continued that “He used his position and power to mobilize about twenty-five(25) armed soldiers to Nsoatre electoral area t bully and work against the party’s candidate, coordinates, polling station and constituency executives present in favour of his candidate”.

“Our MCE has given scholarship packages and other vacancies to unknown people including people from other districts without consulting the party. MCE has failed to collaborate with the party to improve its fortunes and if these actions not controlled it would affect the party in the 2020 elections within our constituency” they added.