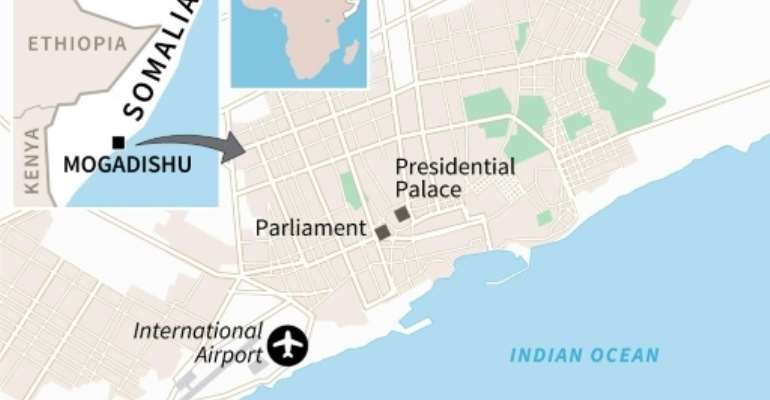 Map of Somalia's capital Mogadishu locating the parliament, near where a large explosion occurred Wednesday.. By (AFP)

A suspected car bomb exploded close to a checkpoint near Somalia's parliament in the capital Mogadishu on Wednesday, witnesses and a security official said.

A plume of thick black smoke was seen over the city and witnesses said a number of vehicles were on fire.

"It looks like a car bomb, but we don't have details yet," security official Mohamed Abdikadir told AFP.

The powerful blast comes just days after the Al-Shabaab Islamist militants claimed a massive car bombing in Mogadishu on December 28 that killed 81 people, and the storming by the jihadists of a military base in Kenya used by US forces on Sunday.

"There was smoke and chaos along the road, the blast was very heavy and I was on my way to the location where it occurred," said Shamso Ali, one of the witnesses to Wednesday's explosion.

"Thanks to God I was a distance away but I saw the smoke and several vehicles caught on fire," he said.

Another witnhess, Dahir Yare, said: "There were several vehicles in the area where the blast occurred and there must be casualties but we don't know so far because the road is cordoned off and security forces were spraying fire.'