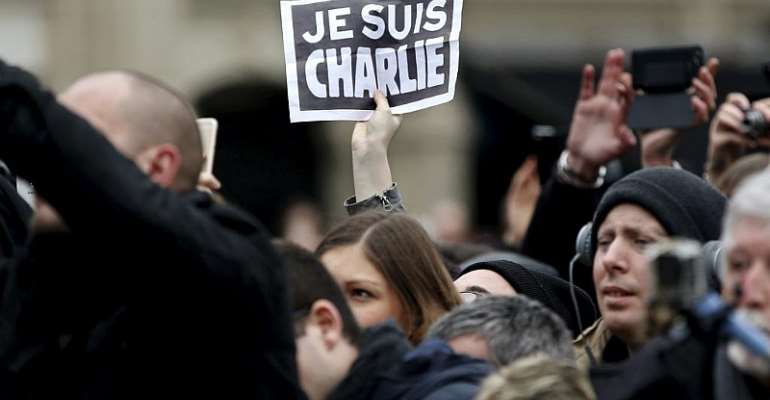 The Islamist attacks that killed 12 people and injured 11 others in and around Charlie Hebdo's Paris office on 7 January 2015 spurned lively public debate about the freedom of the press.

The magazine's attacks on religion, especially Islam, were not to everyone's taste, and its portrayals of the Prophet Mohammed took much criticism for the message they sent to France's Muslims, including those living in impoverished suburban areas.

Still, the attacks cut to the heart of some of France's core values and prompted two million people to march among 40 world leaders at a unity march in Paris on 11 January 2015, with some 3.7 million others demonstrating elsewhere in the country.

“All of French society was calling to defend freedom of expression,” says Pauline Adès-Mével, spokesperson of Paris-based press freedom group Reporters Without Borders (RSF). “Demonstrators were not necessarily readers of Charlie Hebdo, and many did not even like Charlie Hebdo.”

Religious intolerance
On the eve of the fifth anniversary of the attack, RSF joined with two UN special rapporteurs to warn that the spirit of solidarity and support for press freedom was fading.

They sounded an international call for states to protect journalists from religious intolerance and to decriminalise blasphemy, an offense punished by death in some countries.

“We remind heads of state and government – including those who marched against terrorism and for free speech through the streets of Paris on 11 January 2015 – of the importance of not only protecting journalists and cartoonists but also protecting their right to criticise systems of thought,” they said.

“There are worrying signs that we may not be as committed to the defence of free speech as we claimed in the aftermath of the attacks,” said special rapporteur on freedom of religion or belief Ahmed Shaheed.

France sees new threats to press freedom
In France itself, the Charlie Hebdo shootings were the first of a series of jihadist attacks large and small through 2015 and 2016, mostly claimed by the Islamic State (IS) armed group, which claimed more than 220 lives.

Today, large-scale attacks have subsided with the demise of the IS “caliphate” in Iraq and Syria, although smaller attacks continue to claim lives, and the country remains at its second-highest terror alert level.

But RSF acknowledges that religious extremism poses little hindrance to press freedom in France – at least for now – and that more serious challenges are found on other fronts.

“Five years later, freedom of expression is suffering a lot from hate speech on social networks, and this stops people from expressing themselves out of fear they will be criticised or attacked,” Adès-Mével says.

“It's a kind of paradox, because now we have to rely on the state to protect freedom of expression, while it should be part of national debate and public society.”

Press freedom is also the theme of a special fifth-anniversary issue of the magazine, but Charlie Hebdo has set its sights on different targets, namely what it calls “new censorships” and “new dictatorships” imposed by what it calls the “gurus of political correctness” and “monolithic thinking”.

Attacks on journalists
RSF's assessment on France puts more recent highlights on verbal and physical attacks by protesters, especially during Yellow Vest protests of 2018 and 2019, as well as heavy-handed treatment by riot police.

It also cited lawsuits by the powerful Bolloré business group to bring lawsuits against investigative journalists covering the company's activities. But social unrest was aprimary concern for RSF.

“We have seen a lot of insults, threats, physical attacks and injuries coming from protesters at demonstrations,” says Pauline Adès-Mével. “There is also a major issue of violence coming from the police, the fact that journalists are regularly attacked when covering demonstrations.

“We are very alarmed by this level of violence. It's probably the most worrying sign for journalism in France right now.”