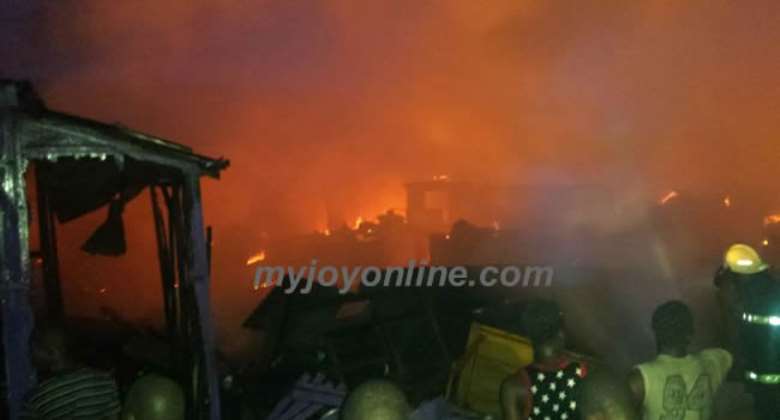 A blazing fire on Monday evening burnt to the ground a pharmacy and several shops at Asante Bekwai destroying property worth millions of cedis.

Speaking to Adom News’ Isaac Normanyo at the scene of the incident, some of the owners of the destroyed shops said fire officers did all that they could but the damage had already been caused.

At a point, the fire was extending to the GCB bank in the area so the manager called for the intervention of soldiers who went over and took the money there to safety.

Akwasi Mensah, an eyewitness said the presence of fridges in one of the shops might have caused the spread of the fire.

He told Adom News they were alerted by some people that the shops behind their house are on fire.

Mr Mensah said when officers of the Ghana National Fire Service came to put out the fire it was not severe but then the fire started to spread.

“They did all they could but the fire was raging because of the materials in the shop. There documents, drugs and the fridges which all burnt to ashes.

“The fire spread to the Old SNNIT building which also houses GCB and the manager did well to save customers cash and other valuables,” he said.

Amos Abban, the Bekwai Municipal Fire Commander said they were informed of the fire outbreak around 6:19 pm on Monday.

Although it is not clear what cause the fire, Mr Abban advised cylinder owners in the area to have they faulty regulators replaced instead of putting stones and other objects on them so as not to trigger any fire outbreak.