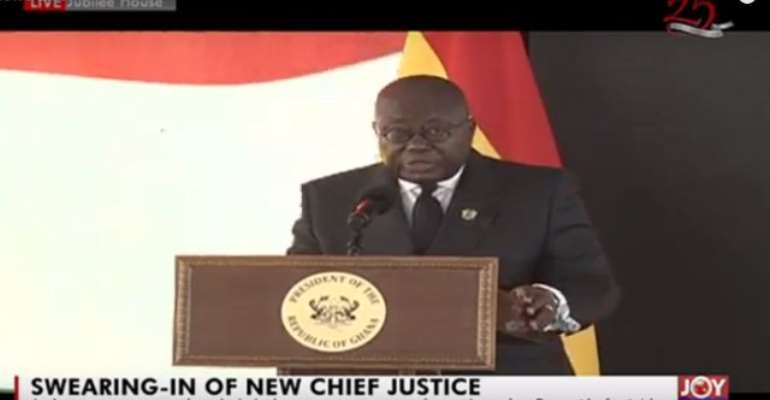 President Akufo-Addo has expressed his preparedness to support the judiciary in improving the infrastructural challenges in going about their activities.

He made these comments at the swearing-in ceremony of the new Chief Justice, Kwasi Anin-Yeboah at the Jubilee House, Tuesday.

The President pledged the government’s support in removing barriers that militate against effective justice delivery in the country.

“I want to underline this assurance by indicating my willingness and preparedness to help address the infrastructural challenges to the satisfactory functioning of the courts that gained the attention of the Chief Justice Sophia Akuffo,” President Akufo-Addo explained.

The poor state of Ghana’s courts has been at the heart of the immediate past Chief Justice, Sophia Akuffo.

Madam Akuffo has, on numerous occasions, advocated quality infrastructure of courts within various district assemblies assuring her outfit’s continuous commitment to ensure that the courts were properly staffed to adequately perform their duties.

In 2018, she threatened to close down the Kasoa District Court and all other courts which are not purposely designed for the Judiciary.

During the visit, the Magistrate of the Kasoa District Court, Felicia Gandezi, stunned the former Chief Justice and her entourage when she brought out a chamber pot she had been using as a place of convenience to demonstrate the challenges confronting the court.

In March of that same year, Madam Akuffo during a working visit to the courts in Tema again lamented the poor state of infrastructure of the lower courts, calling for an upgrade in order to improve their services.

However, the former Chief Justice was beside herself with joy when the President promised to see to such infrastructural development.

President Akufo-Addo also pledged to maintain a strong bond with the judiciary to advance the course of good governance.

“I assure Chief Justice Anin-Yeboah that I will be a reliable and trusted partner of the judiciary so that the Executive and Judiciary can cooperate in the spirit of mutual respect to entrench good governance for the advancement of our people,” the President said.

Justice Anin-Yeboah was approved by Parliament’s Appointments Committee after vetting in December 2019.

He becomes 26th Chief Justice of Ghana since 1876.