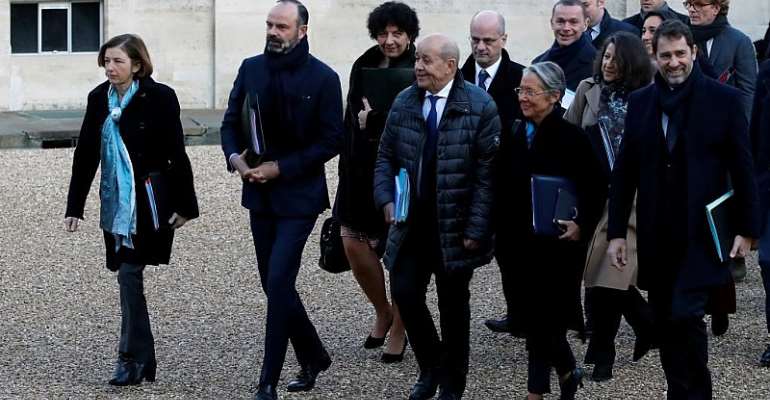 French Prime Minister Edouard Philippe has begun the next round of talks with unions over pension reforms that have sparked the country's longest transport strikes in fifty years. Meanwhile, unions in oil refineries on Tuesday joined the strike action, vowing to down tools for four days.

Earlier on Tuesday, Philippe told French radio RTL that he was open to discussion and that he did not wish to see an "irresponsible" reform put in place.

"A balanced pension system must be guaranteed, and I have suggested the 'pivot' age as a way to do it," he said. "But if trade unions and employers can agree on a better system, I'm open to this."

The talks are to continue over the next two weeks as the government tries to find an agreement to end the strikes, now in their 34th day.

"To find a compromise, everyone has to budge a little," Philippe said.

While insisting the pension reform would not be abandoned, Philippe struck a conciliatory tone on a key sticking point – the government's insistence that people work longer in order to keep the pension system afloat.

"It's our responsibility to take care of the future retirement system so that it's fair. But I'm open to discussing all propositions that could lead to this," Philippe wrote on Twitter.

Philippe expressed optimism before the talks, an outlook shared by his Finance Minister Bruno Le Maire.

"Never has a compromise seemed so close," Le Maire said.

Separate talks proposed
The moderate CFDT union, with which the government is hoping to do a deal and break the back of the strike, has baulked at government proposals to extend to 64 the age at which people qualify for a full pension – two years after the current official retirement age.

"The pivot age must be removed from the bill," CFDT leader Laurent Berger said as he arrived at the labour ministry for the talks.

Instead, the CFDT has proposed to hold separate talks on Friday on how to finance the plan later, in order to end the impasse over the pivot age.

But the hard-line CGT and FO unions have vowed to derail the reform proposals, urging a new day of mass walkouts on Thursday 9 January, which could see schools shut and public transport even more impacted than usual.

Another day of rallies is scheduled for Saturday.
CGT has stepped up its protest with a four-day blockade of oil refineries and fuel depots starting Tuesday, raising the prospect of petrol shortages.

Philippe reminded workers that this kind of action is illegal.

"The right to strike is perfectly respectable," he told RTL "But blocking refineries and depots is illegal."

He also said police units were on standby to prevent any blockades of refineries or depots.

The head of the CGT, Philippe Martinez, insisted they were not calling for a blockade, but simply strike action.

"Seven out of eight refineries and depots are currently on strike," confirmed Emmanuel Lépine, the head of the chemical branch of the CGT.

Nurses, physiotherapists and lawyers, among dozens of professions with their own advantageous pension regimes, have also voted for strike actions this week.

According to an Ifop poll conducted for the Journal du Dimanche newspaper, more than half of French people (55 percent) feel that the government should not carry out the pension reform in its current state.

However, the same poll showed public support may be shifting in the government's favour, with just 44 percent continuing to back the strike – down seven points from the previous survey just before Christmas.

An Elabe poll released Monday found that most 54 percent of French people support the points-based plan, though two-thirds oppose the pivot age of 64.

Seven electrocuted, five others injured at Amanfrom
54 minutes ago