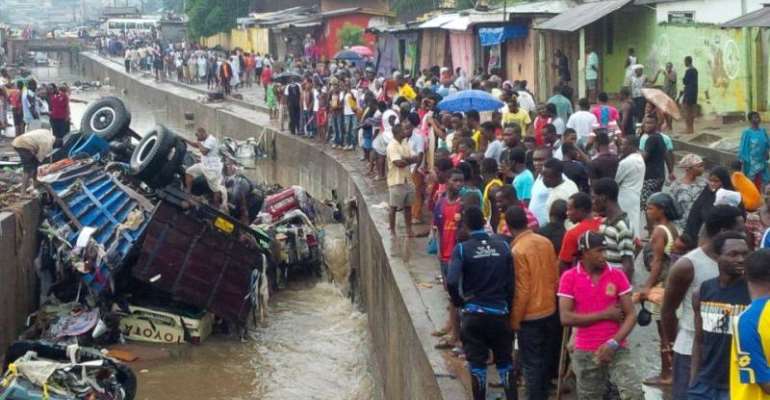 Globally, climate change has gotten momentum as the drift in weather patterns continues to paint a gloomy picture across board.

While the change in the weather pattern is majorly attributed to unfavorable activities of man that bedeviled the ecosystem, Ghana must not wait until we hit ground zero where people breathe toxic air, all vegetations are cleared for Industrialization and construction of houses or estates before we act.

Again we must also not shut our eyes that the air we breathe these days is becoming more toxic and polluted due to numerous vehicular fumes and factories.

According to 2019 report released by the World Health Organisation (WHO), air breathed in Accra is highly contaminated.

The over 3-year survey also emphasized that air pollution kills an estimated number of seven million people worldwide every year.

The findings further revealed, 9 out of 10 people breathe high levels of air pollutants each day.

WHO also stated that Accra is mostly clouded with smoke due to fumes emitting from factories, cars, and other smokes from abattoirs which resulted in increased mortality from stroke, heart disease, chronic obstructive pulmonary disease, lung cancer and acute respiratory infections causing about seven million premature deaths each year.

The death toll according to WHO was as a result of combination effects of (outdoor) and household air pollution.

As usual, every endeavor of our activities these days are either affecting one person or the other on the life value chain.

Even up till now, households still burn rubbishes in the open, people still site factories closer to human settlements, importation of secondhand electronic products such as fridges and cars that are not eco-friendly are ongoing as if Ghana is not part of the United Nations sustainable development goals agenda.

There is no doubt that people leaving in Tema in the Greater Accra region have had their share and are still battling with issues of air pollution due to the presence of factories there.

This challenge is expected to escalate to other areas as we pursue 1D1F (one district, one factory) policy agenda without any recourse to international standard.

In the immediate past year 2019, government of Ghana published over fifty factories that are set up or assisted to expand production capacity.

Although the factories, their location, production capacity and the amount of labour force they will be hiring directly and indirectly were published, there was no report on environmental impact analysis of the factories.

What was shocking was that not even the mandated authority; Environmental Protection Agency(EPA) find it needful to publish any analysis on these factories on their website.

What was also missing in all the publications in relation to these factories is whether there will be a mechanism to neutralize fumes from these factories before it get into the atmosphere to reduce the hazards and protect all habitats.

Again, where their waste products such as waste water, remains and chaffs etc, are going to be discharged to, are not known. Practices which is opposite to what happens in Singapore, Switzerland, Malaysia, China, USA and other countries that we are striving to catch up with.

Indeed agencies mandated to ensure environmental safety in these countries will always publish their environmental impact analysis reports on factories that are or will be built. They will sometimes also advise citizens relocate to safety places if they feel their lives are may be at risk

For far too long the sea has suffered from harboring our solid and liquid waste products.

But while we agree to be part of the global nations that are fast tracking the protection of life on land and under water as part of the sustainable development goals (SDGS), review of execution of projects ranging from Industrialization, housing, importation of gadgets must be in line with the international standard and acceptance.

There's no denying the fact that Industrialization is hinged on providing jobs to the ever growing population of our country.

However, It is one thing establishing factories by clearing farm lands and forests reserves as means to lessen the challenges of unemployment and score high economic growth but it is also another thing making sure that people who are affected are compensated and as well ensure that other people leaving closer to these factories or outside the factories jurisdiction do not become recipients of contaminated environment and inhale toxic air.

It is also important to note that , the environment will definitely pay us back if we ignore due process and do things haphazardly without any technical considerations.

As a famous quote "there is no such thing like free lunch" and as such we can destroy the environment with our activities and enjoy all the benefits today, but nature will have its own way to compensate humanity for good and bad.

Again while we find it commendable to own high rise mansions, luxury houses, drive big cars ; it must be in line with the United nations standard. Strict Enforcement of laws, following required process among others must be keenly looked at.

It is no more funny as many regulations regarding E-waste product importation, sitting of factories, and environmental pollution are left unenforceable.

Government has no excuse than to act in the right direction that devices, factories and cars that are continuously emitting carbon monoxide and other toxic substances that pollute the environment, affect people and gradually deplete the ozone layer are closed down with an immediate effect.

As government pursue one district one factory agenda, environmental impact analysis on these factories must be made available for public scrutiny.

Again, places of discharging By-product of the over fifty factories and the yet to be constructed ones as outlined by government as part of 1D1F must be made known to the public to prove government commitment towards the 2030 SDGS agenda.

Government must also see the need to neutralize smokes that will be emitted from these factories as means to protect people from inhaling polluted air and as well safeguard the ozone layer from depleting.

To it, Ghana's Industrialization agenda, real estate developments, massive importation of used electronic products and cars must be done in connection with the country's environmental safety to combat climate change and environmental pollution consequences.

Real estate developers must not be left out of the hook but rather they must be tasked to plant specific number of trees after construction.

In the same vain abattoirs, households and other institutions must see the need to revise their activities that are detriment to the environment and adopt new practices.