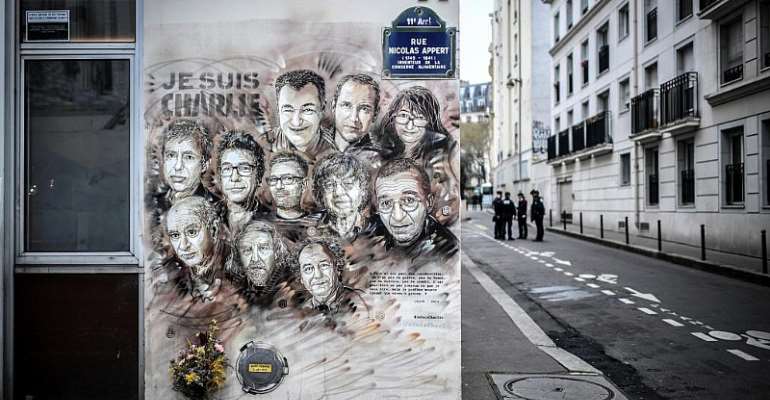 Five years ago to the day, the offices of satirical magazine, Charlie Hebdo, were the target of a jihadist attack that claimed the lives of 12 people. On Tuesday, 7 January 2020, a special issue of Charlie targets a new form of censorship imposed by the “gurus of political correctness”.

"They believe themselves to be the kings of the world behind their keyboard and smartphone," writes managing editor Riss.

Five years on from the attack, the weekly's new headquarters remain secret. A staff member describes the offices as "like Fort Knox...with numerous special doors...lifts, stairs, airlock passages and a code word signifying a serious threat that would send everyone to the panic room.”

But staff are far from content to remain to remain hidden, discreet: to mark the fifth anniversary, Charlie Hebdo is hosting an open invite event at Paris' Maison de la Radio on Tuesday evening, where the public can meet the journalists.

Three days of terror
On 7 January 2015, at 11:30 AM, French-Algerian brothers Chérif and Saïd Kouachi, armed with assault rifles, entered the offices of Charlie Hebdo on rue Nicolas Appert in the 11th arrondissement of Paris.

They killed 11 people on the premises, including well-known cartoonists Cabu and Wolinski whom they ask for by name before killing them.

While fleeing from the scene, the Kouachis stopped to kill their 12th and final victim, police officer Ahmed Merabet, who was on patrol in the area.

The Kouachi brothers shouted that they avenged the prophet Mohammed by “killing Charlie Hebdo”. The magazine regularly published cartoons of the prophet, which is deemed offensive by some Muslims.

The brothers claimed to have been sent by al-Qaeda in the Arabian Peninsula and told police they were ready to die as martyrs.

On the morning of 9 January, they were killed in a shoot-out with security forces as they emerged from a printing house where they were holed up.

Jewish supermarket siege
A second series of attacks was perpetrated by Amedy Coulibaly, who killed a policewoman in a southern suburb of Paris on 8 January.

A day later, Coulibaly entered a Jewish supermarket at Porte de Vincennes, taking hostages. He killed four of them before he was gunned down by French special forces.

Coulibaly had pledged allegiance to the Islamic State armed group. He had served a prison sentence alongside Cherif Kouachi and other known radicalised Islamists in France.

But the solidarity was short-lived, as the attacks exposed deep divisions across society.

Students from some 200 schools, many in areas with large immigrant populations, boycotted the rally, accusing Charlie Hebdo of being anti-Muslim.

Then prime minister Manuel Valls came under fire for citing France's "geographical, social and ethnic apartheid" as the reason for the rise in extremism.

The three-day terror attack sparked a national debate about the radicalisation of France's disenfranchised young people – a debate that is far from done today.