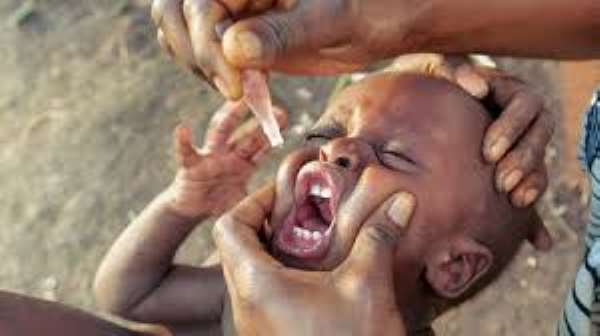 The Ghana Health Service (GHS) will from tomorrow, Wednesday, embark on a 5-day polio vaccination exercise in the entire Oti Region.

The aim of the exercise is to prevent a resurfacing of poliomyelitis in all eight districts of the region following the record of a case in the Nkwanta North district of the region.

The condition which was first detected in an eight-year-old child in the district prompted the GHS and its partners to undertake a vaccination exercise for children in the Nkwanta North and Nkwanta South Districts in December 2019.

Some 148,438 children have been estimated to participate in the house to house vaccination exercise which starts on Wednesday, 8th January to Sunday, January 11, 2020.

A Deputy Regional Director of health in charge of public health at the GHS, Dr. Yao Ofori-Yeboah told the press that volunteers have been trained and equipped to undertake the exercise.

The Volta Regional Health Directorate also indicated that a multifaceted approach to publicity is being engaged in creating awareness about the vaccination exercise.

The officer in charge of the Expanded Program on Immunization, Anthony Penin said pockets of the epidemic are being recorded in various parts the country but enough logistics have been provided to combat the epidemic.

Polio, short for poliomyelitis, is an infectious disease caused by the poliovirus. In about 0.5 percent of cases, there is muscle weakness resulting in disabilities.

Organizations like Rotary International and the Gates Foundation have been very supportive in the near eradication of the epidemic.

This time, however, the Center for Disease Control and Prevention, United Nations Children’s Fund (UNICEF), the World Health Organization and the Local Assemblies have teamed up with the Ghana Health Service to rid the Oti region of poliomyelitis in the enclave.