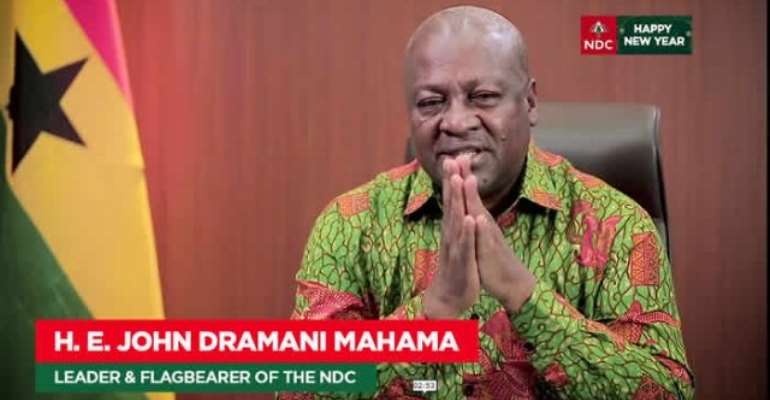 Ghanaians have been humbly called upon to change the destiny of the country Ghana by voting the National Democratic Congress (NDC) into power in the December 2020 Elections.

This appeal was made by the Former President John Dramani Mahama in his 2020 New Year Message.

According to John Mahama Ghanaians should go into the December 7th Elections with a clear reflection and understanding that elections are very critical to the destiny of Ghana.

In a pre-recorded New Year message, the flagbearer of the opposition National Democratic Congress (NDC) said, more than ever, the country needs a more responsive government to competently administer the affairs of the country.

“I do not say it lightly when I say that the 2020 elections will be a pivotal event for our country. It is one that will determine the destiny of our nation. And I believe at this critical stage in our nation’s life that Ghanaians deserve more than ever a government that is honest and truthful with them; a government that takes responsibility and gives them results not excuses or blame,” he said.

He also said Ghana needs a government that opens up opportunities to all its people and not just a few.

Watch Mahama’s New Year message in the video below.

President is seeking to return to the Jubilee House in the December general elections after crashing out of office in the 2016 polls.

John Mahama, then the President, lost to candidate Nana Akufo-Addo in a fiercely-contested 2016 general election. Akufo-Addo polled 53.9% of the total valid votes, while John Mahama managed 44.4%, the worse so far for an incumbent President.

VIDEO: Central bank backed digital currencies is the way for...
9 minutes ago