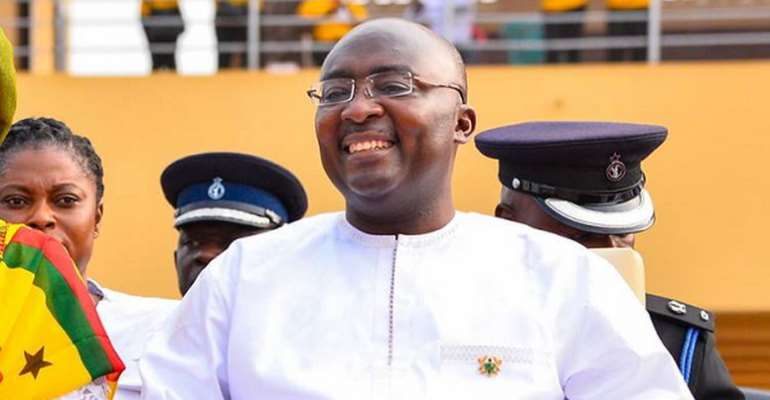 The coming of the Akufo-Addo government meant that Ghanaians had voted for change, not just for the sake of it but a change in the way things are done. And if there is anyone spearheading this change in the digitize world, then it's Vice President Dr. Mahamudu Bawumia.

Since the government of President Akufo-Addo assumed office in January 2017, Dr. Bawumia, who has been nicknamed 'Digimia', because of his passion and drive to modernize processes, has led the charge to formalize the largely informal Ghanaian economy. He has also challenged ICT companies in Ghana to come up with technological solutions to address the challenges facing the nation.

I followed him to a number of ICT companies in Ghana where he met and interacted with these 'tech guys'.

Such a digitization drive has led to a drastic reduction in clearing and turn-around times at the country's ports through the introduction of a Paperless Port system.

Since its introduction in September 2017, many who are engaged in the country's port say it has brought tremendous transformation and efficiency.

The same can be said at the Driver and Vehicle Licensing Authority-DVLA (DVLA). The use of technology has gradually eliminated the ''goro boys'' syndicate which hitherto was a problem for the DVLA.

Recently, the Vice President announced that the DVLA in collaboration with the National Insurance Commission will introduce a system where with the aid of a mobile phone a passenger of a public transport will be able to determine if the car he or she is boarding is insured or not.

That's not all, the Vice President led the introduction of the Digital Property Addressing System. This provides digital addresses for parcels of the land and properties in the entire country. Every land or property has been assigned a unique identifier to facilitate improved ownership data and unique identification of properties.

Though this move generated heated debate over the cost, gradually many have seen its usefulness.

Dr. Bawumia from day one since his assumption of office has been preaching financial inclusion in the country and the provision of banking services to every resident of Ghana through the innovative Mobile Payments Interoperability platform.

The push for a digitized economy has also been extended into the health sector: Ghana now has the world's largest medical drone programme, delivering critical blood supplies and other medical consumables to rural and hard to reach communities. The project which is being handled by Zipline Technology currently has offices in the Ashanti, Eastern, Greater Accra and the North East Region.

Also, citizens can now renew their National Health Insurance cards from the comfort of their homes within minutes instead of hours and sometimes, days. With a short code, this can be done with ease.

Dr. Bawumia recently announced that government was in the process of making the country's hospitals go paperless. Already, some public hospitals like the Legon Hospital have begun the process.

Business registration, procurement and justice delivery are also going digital, with efforts ongoing to digitise the entire economy in the shortest possible time.

That's not all, the Vice President last year called for a re-examination of land management and use in the country in order to add more value to the resource. He said this also allows for leveraging land to achieve other objectives. He announced government's determination to digitise the administration of lands.

Despite various government interventions, including Phases I and II of the Land Administration Project, the issue of land ownership and use has been a thorny one over the years.

The passport office cannot be left out. Now, application for a passport has gone online, no more ''goro boys'' and the passport syndicate which milks people who are in dire need of passports, has collapsed.

In my series of interaction with the Vice President he says the ultimate goal of government is to remove unnecessary procedures that allow stealing in public service.

“When we said that you cannot pay for services with cash, you should pay electronically, what we have found out is that government collection went up by four folds. Four times in one ministry. Just the Ministry of Tourism, so where was the money going?”

Government maintains that with digitisation, new and more efficient ways of doing business will be introduced to help attract investors.

The Vice President is also pushing for an instant issuance of biometric ID cards which will serve as the bedrock for all digital initiatives such as tax collection and business registration.

“This is the first time we have biometric issuance of national ID cards in the world. We have implemented the digital address system, digital drivers' license and digital registration, mobile money interoperability, which is a major step to financial inclusion and cashless payment for public services,” he told me.

Outlining more projects being done by government, Dr. Bawumia stated that critical institutions such as the Ministry of Health will soon coordinate all health records on a single platform to enable doctors and health officers access it anywhere in the country.

Technology is gradually changing the world and Ghana must not be left out. Today, we have a Vice President who has devoted a lot of his time to make Ghana fit into the ''new school''.

We should embrace this push and formalize things in this country of ours.