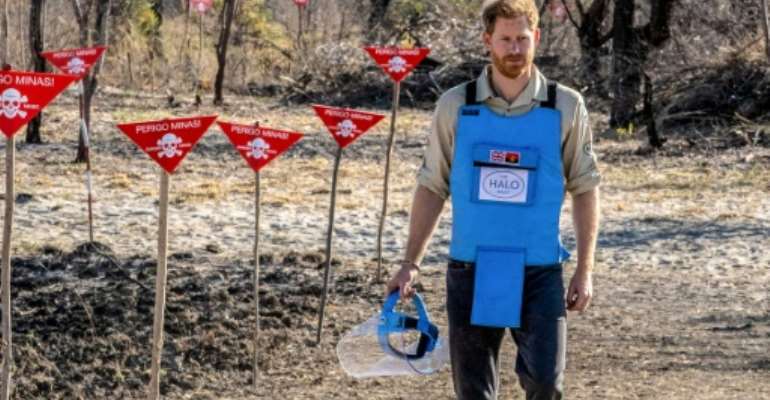 Prince Harry visited Angola in September to highlight the problem of landmine left after the country's civil war. By - (The HALO Trust/AFP)

At least five people were killed in Angola after a vehicle drove over a landmine in the northeast, the government said on Monday.

More than one million landmines were planted during Angola's 27-year war, which started after the southwest African country's independence from Portugal in 1975.

After the war, Angola pledged to eradicate landmines by 2025.

But more than 1,200 minefields remain to be cleared and hidden explosives continue to claim lives.

The latest incident took place in the province of Lunda Sul late on Sunday, when a land cruiser carrying 13 men struck a landmine between the towns of Cacolo and Alto Chicapa.

"(The vehicle) set off a suspected antitank mine, leaving five people dead at the scene and eight seriously injured," said the interior ministry in a statement.

The wounded were rushed to the provincial hospital, 145 kilometres (90 miles) away from the explosion.

Driver Antonio Perreira said he was confused about how a landmine had remained hidden on a such a well-travelled route.

"Many cars drive along this road," Perreira said from his hospital bed. "I do not know how it happened. We set off the mine and a lot of people died."

Landmines in Angola have injured between 40,000 and 60,000 people, according to government estimates.

The last deadly blast recorded before Sunday's incident took place in the southern Cunene province, where five people were killed in October 2019.

Angola's landmines drew international attention in the late 1990s, after Britain's late Princess Diana famously walked across a cleared minefield near the central city of Huambo.

Diana's son Prince Harry returned to the area in September last year as part of an official visit to the region -- echoing his mother's calls for action.

But Angola's government has since complained about lack of funding for mine-clearing work and warned that meeting its 2025 target would be "difficult".