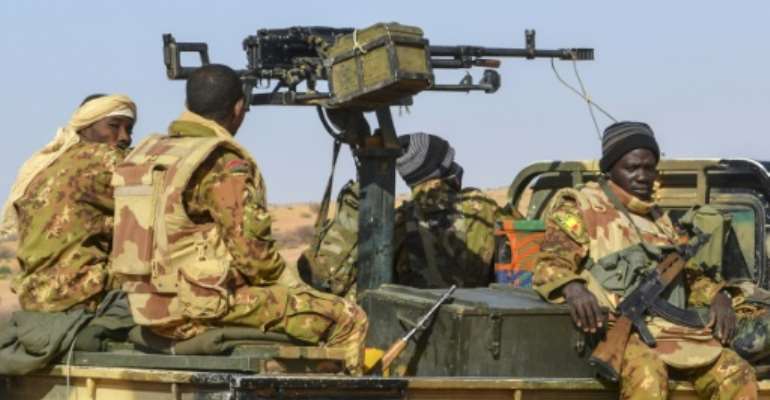 Malian Army have been battling an Islamist insurgency since 2012. By Souleymane AG ANARA (AFP)

The troops were travelling in the region of Alatona, near the border with Mauritania, when their convoy hit a homemade bomb and then came under fire.

Mali has been struggling to contain an Islamist insurgency that erupted in the north in 2012, and which has claimed thousands of military and civilian lives since.

More than 140 Malian soldiers died in jihadist attacks between September and December.

A Malian army refuelling truck that had left the town of Diabaly in the centre of the country hit the bomb early on Monday morning, said a non-commissioned officer who was sent in to reinforce the area.

Militants, who were travelling on motorbikes and in cars, also fired on the soldiers.

"There were deaths on our side and on the side of the assailants," the officer, who requested to remain anonymous, told AFP.

"The reinforcements came in time and we recovered our (dead) bodies and the wounded," the officer said, adding that he was unaware of the total number of victims.

Four vehicles were destroyed in the ambush, according to government spokesperson Yaya Sangare.

Despite some 4,500 French troops in the Sahel region, plus a 13,000-strong UN peacekeeping force in Mali, the conflict has engulfed the centre of the country and spread to neighbouring Burkina Faso and Niger.

Hiding homemade bombs under well-travelled roads is a frequent means of attack used by jihadists. Otherwise known as improvised explosive devices, they kill and maim scores of victims every year in Mali.

The UN said in October that 110 civilians in Mali had died in roadside bomb attacks during the first six months of 2019.