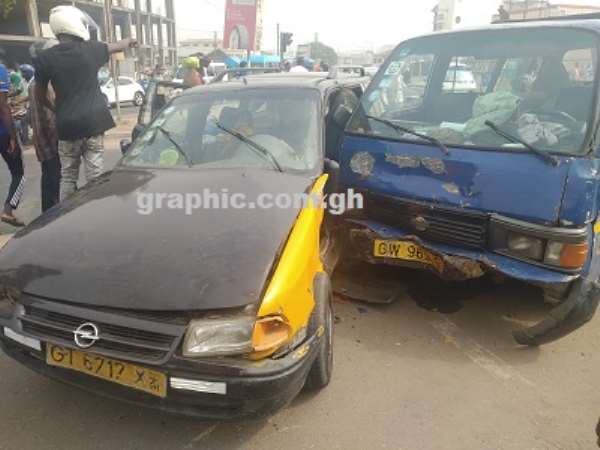 Four passengers on board a taxi cab escaped unhurt when a commercial bus (Trotro) loaded with bags of rice slammed into the side of the car on the Graphic Road in Accra.

The driver's side of the taxi got mangled after the crash but the driver was on his feet at the accident site checking on the wellbeing of his passengers after the incident.

He was later sent to the Odorna Medical Centre after complaining of some pains in his ribs.

The accident occurred around 10 am yesterday at the intersection close to the Graphic Communications Group Limited on the Graphic Road when the commercial bus with registration number GW 969 S slammed into the side of the taxi with registration GT 6717 X as they jostled to join the road to Agbogbloshie.

The incident created vehicular traffic at the intersection as many pedestrians gathered around the vehicles and some others assisted to remove the passengers from the vehicles.

Eyewitness account
According to eyewitnesses at the scene, the accident occurred because of the non-functioning traffic lights which result in all drivers jostling for the right of way.

They bemoaned the absence of traffic wardens at the intersection since the traffic lights have not been functioning for two years.

Police
A traffic warden who arrived later at the scene said the vehicles will be towed to the Central Motor Traffic and Transport Department as part of investigations into the accident.