State Of Press Freedom In Somalia In 2019: Working Under Pressure And Targeted Attacks 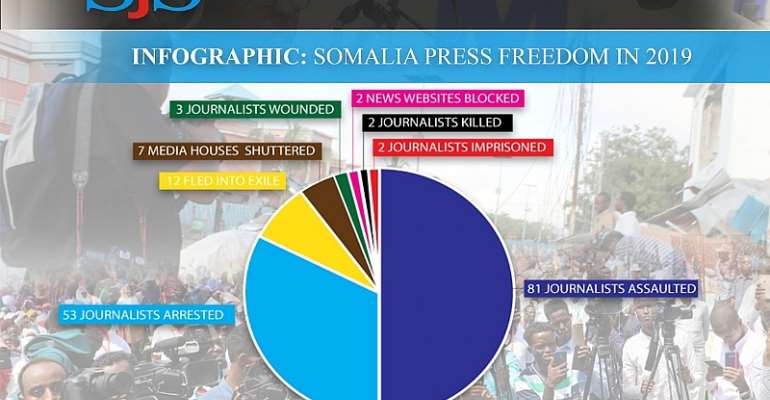 As 2019 ends, multiple actors continue to target Somalia media and its professionals through continued attacks, arbitrary arrests, death threats, and obstruction of access to information – all representing a vital constitutional right that citizens were meant to enjoy. Instead, authorities continued to order arbitrary arrests and suspensions based on perceived criticisms, blocked independent news websites and introduced an anti-press bill currently before the Upper House of the Federal Parliament.

While the number of journalists killed in Somalia was considerably less than previous years , the level of arbitrary arrests, attacks and suspensions remained high across Somalia. Local and Federal authorities continue to enjoy total impunity and powers to suppress Somali journalists –whether in Mogadishu, Kismayo, Hargeisa or Garowe – whenever journalists publish or broadcast perceived criticism towards them.

According to interviews with journalists, officials routinely ordered the detention of journalists as an intimidation exercise to quell critical stories. This trend may explain why the majority of journalist detentions took place without any charges presented across Somalia in 2019.

Multiple elections took place across Somalia in 2019 and end of 2018, and subsequent attacks against the press covering these elections also took place. The politically sensitive elections could partially explain the high level of state-led attacks on the press in 2019 with 81 journalists physically assaulted while on duty.

Authorities also arrested 53 journalists during the year. Somaliland arrested 18 journalists with two remaining incarcerated by end year. Puntland arrested five journalists. Police in Puntland have been extremely aggressive against the media and carried out four raids on independent media houses for covering investigative news reports deemed critical to the state.

Three journalists were wounded, two of them with gun shots, during the year. The most serious incident took place in Las’anod where a Somaliland police officer shot and injured a TV journalist during a violent arrest while a member of Hirshabelle Parliament cruelly assaulted and injured another TV journalist in Beledweyne.

Key red lines for coverage remain across the country. Somali police in the country’s capital, Mogadishu, have blocked journalists covering bombing sites and other security incidents more than 15 times during the year. Other areas such as reporting on human rights abuses, especially those perpetrated by state actors, remains another “no-go” area for the Somali press. Online expression is further curbed after state actors repeatedly targeted and harassed journalists on the internet for any critical personal social media posts.

Across Somalia authorities shuttered, temporarily suspended or raided seven media houses including five broadcasters and one newspaper, in addition to two news websites blocked. The main perpetrator for these closures is Somaliland, seconded by Puntland and Hirshabelle states. By end year, the local, independent City FM remained closed in Jowhar Targeted killings against journalists and media staff has significantly declined in 2019 compared to the previous years . So far two journalists died in a hotel attack in the southern coastal town of Kismayo by al-Shabaab militants. While an improvement over previous years, federal and regional authorities have done little to curb impunity towards killed journalists in Somalia. The country maintains the ignominious world title for impunity towards killed journalists for the fifth year in a row.

The barrage of attacks against the press, predominantly perpetrated by state actors, was one key reason the Somali Journalist Syndicate (SJS) was formed in May 2019. Identifying a dearth in effective associations that holistically protect the Somali press, professional Somali journalists set up SJS to defend the rights of working journalists and promote press freedom. Through advocacy, legal aid and capacity building, SJS is increasing in participation by journalists across Somalia on a daily basis. During the last part of 2019, SJS trained 70 journalists- 40% women journalists- with skills ranging from safety, documentary production as well as editorial planning for good journalism.