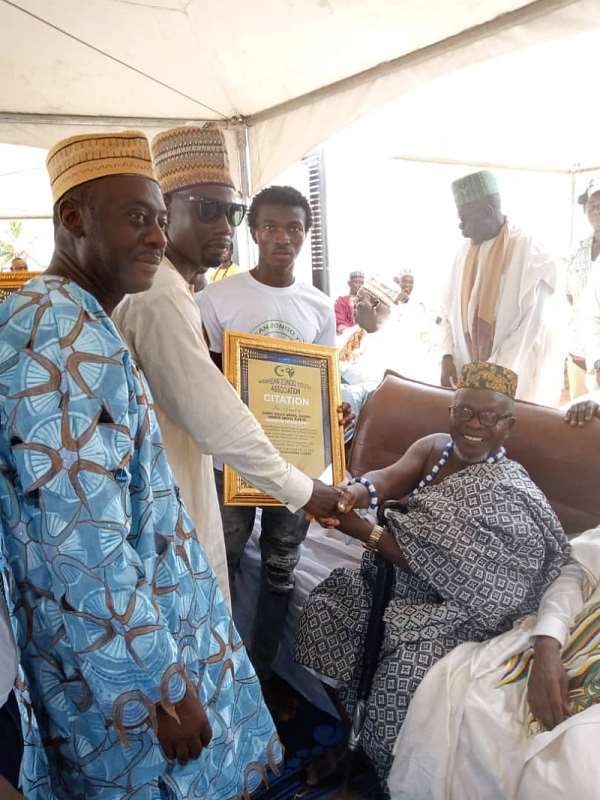 The Manhean Zongo Chief, Sarki Abdul-Kadir Ahmed Abdul-Kadir has been recognised for his efforts and contribution towards the development, peace, unity and youth empowerment within Amasaman Municipality and beyond.

The Chief was presented with two citations from two different Youth Associations within the Amasaman Municipality.

The two citations of honour were presented to him during a colorful and well organized naming ceremony at his resident in Manhean, a suburb of Accra on December 28, 2019.

Sarki Abdul-Kadir is a successful businessman who has acquired a lot and has played major roles to bring improvement into the lives of many in society.

Sarki Abdul-Kadir with his tenacity, courage and hard work was installed as the legitimate Manhean Zongo Chief in November 27, 2016 and since then he had advanced the Manhean community to the admiration of other neighboring communities.

Among the success chalked by the chief included settling of disputes within the people, ensuring peaceful coexistence between other tribes and religion in Manhean and the neighboring communities, contribution towards construction of Mosques, lobbying for government developmental project for the Manhean community which include roads and drainages, organizing clean up exercise, free health screening, enrollment of over 270 on National Health Insurance Scheme, scholarship for orphans within the Manhean community, among others.

The show of exemplary leadership by the chief caught the attention of the two Associations to recognized his efforts and surprised him during the naming ceremony of his new born baby, Islam Abdul-Kadir Ahmed.

Sarki Abdul-Kadir Ahmed Abdul-Kadir in his response expressed gratitude to the two Youth Associations for the honour done him.

He encouraged his Council members not to rest on their oars, but support him to do more so that the respect that Manhean Zongo had attained in the neighboring communities would be sustained for further development of the community.

In a related development, the outgoing Assembly Member for the area, Hon. Malik Abass was also honoured with a citation by the Manhean Zongo Youth Association for his selfless leadership and some developmental project he brought to the Manhean Electoral Area during his tenure as the Assemblyman.

The outgoing Assemblyman, used the occasion to wish his successor well in his new endeavour as the Assemblyman elect for Manhean Electoral Area.

The incoming Assembly Member for Manhean Electoral Area, Hon. Nathaniel Nii Lomotey Tetteh also expressed his readiness to bring massive development to areas under his jurisdiction and pledged to continue the good works of the outgoing Assembly member.

Hon. Dr Rashid Pelpuo and the representative of the MCE used the opportunity to introduced their aspiring Members of Parliament for Amasaman constituency Hon. Sedem Afenyo and Hon. Akwasi Afrifa Mensah respectively to the people at the gathering.