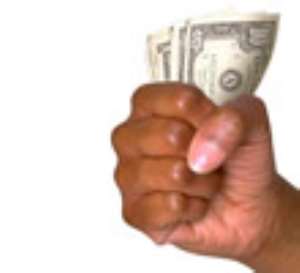 The Economist Intelligence Unit (EIU) has pointed out that there is too much dollarisation of the Ghanaian economy. This means, the dollar is dominating as a medium of transacting business in Ghana.

In its 2006-07 country report and forecast of the Ghanaian economy, the EIU says "though the cedi showed greater stability in 2005, the current level of high dollarisation in the country suggests that the cedi still lacks credibility as a national currency."

"The level of dollarisation, unsurprisingly, means that many transactions in Ghana are quoted in US dollars, and often payments are also actually made in US dollars", says the EIU report. This practice, the report says undermines the very foundation of the national currency.

According to the report it would require a track record of many years of stability before some credibility can be restored to the currency and allow the level of dollarisation to drop to more moderate levels.

True to the EIU's findings, it is only items like pure water, gari and beans, kenkey, trotro fares that are not quoted in dollars; every other thing, including services and consultancy fees are quoted in dollars. In some shops, even bottled water and vegetables are sold in dollars, with customers given the option to pay in dollars or cedi equivalent. Some private schools are reportedly indexing their fees to the exchange rate of the dollar.

This reporter has gathered that the Bank of Ghana does have some form of regulation against doing business in dollars, but this regulation has hardly been invoked.

EIU forecasts that though the cedi is expected to depreciate modestly over the next two years, there is still a strong risk that it could experience volatility again due to external shocks or if it becomes too over valued. "Hence, it looks likely that Ghanaians will be cautious about switching to using only the cedi in their transactions and the level of dollarisation will remain very high", the EIU predicts.

Last Monday the governor told journalists during a briefing on the outcome of the quarterly review of the economic performance and outlook that the Monetary Policy Committee (MPC) expected Ghana to hit single digit inflation by December 2006.

Dr Acquah, who is the Chairman of the MPC, said if the economy was able to record a single digit, it would serve as a benchmark to further reduce the figure while efforts were made to sustain it. He said such measures would ensure that the probability of reverting to a higher inflationary figure was minimised.

The year-on-year inflation for the period under review declined from 14.6 per cent in January to 12.1 per cent in February. It closed at 14.8 per cent at the end of December 2005. The EIU however, argues that achieving single digit inflation is unlikely mainly due to a lax fiscal policy, which led past governments to rely on domestic borrowing.

Dr Acquah explained that the inflationary outturn captured the first round effects of the February re-alignments of domestic petroleum prices by an average of 10 per cent oil price increase, which pushed up the monthly increase in the Consumer Price Index to 2.5. per cent from 0.7 per cent in January.

According to the EIU, with the February 2005 fuel price increase dropping out of the annual comparison from February 2006 is expected to return to a downward path. "The authorities have once again targeted single-digit inflation for the end of 2006, but it is not clear whether this will be achieved, given the strong inflationary pressures that will continue to persist in 2006", says EIU.

EIU predicts that as a result of these continued pressures inflation in 2006 will remain in double-digits, at 12.5 percent and will average 13.5 percent. "However, the continued downward trend in inflation in 2007 should improve the prospects of reaching single-digit inflation in that, especially with oil prices forecast to fall", says the EIU.