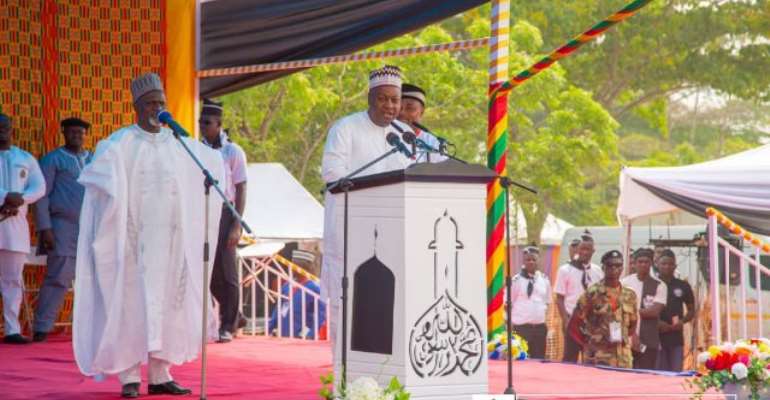 Former President John Dramani Mahama has urged religious and traditional leaders to be bold in criticising the worrying levels of nepotism and corruption under the Akufo-Addo government.

“Nepotism doesn’t become right because a different government is in power and our religious and traditional leaders must have the courage to speak up against it”, he said.

The flagbearer of the National Democratic Congress (NDC) said this in an address at the 88th Annual National Convention of the Ahmadiyya Muslim Mission Ghana.

Mr Mahama who addressed the Convention on the theme, “Corruption- A threat to national development, peace and security,” said nepotism breeds corruption, adding that corruption has been the bane of Ghana’s development.

According to him, while corruption exists in advanced countries as well, the existence of strong institutions and the values of transparency have helped them to reduce corruption to an absolute minimum.

He pointed out that the only way to succeed in the fight against corruption is to “strengthen the anti-corruption institutions, fund them appropriately and provide them with the human resources for them to do their work.”

He also said the institutions can only be effective if they are given autonomy and independence in their functions.

“They must have the autonomy and independence to sanction and to deal with any person who indulges in corruption”.

The NDC flagbearer recognised the role of the media in fighting corruption, noting that they are the watchdogs over those in power. He, however, expressed his disappointment with sections of the media, explaining that it is a paradox when the media acts as a watchdog of the government against the people.

Mr Mahama assured Ghanaians that if given the mandate in December 2020 elections, he would ensure the effective implementation of the assets declaration regime and make it fully compliant.

He commended the Ahmadiyya Muslim Mission in Ghana for their continuous contributions towards the physical and moral developments of its members in particular and Ghanaians as a whole.

The former President called on Ghanaians to pray for a peaceful and transparent election.

The Ameer and Missionary-In-Charge of the Ahmadiyya Muslim Mission Ghana, Maulvi Noor Mohammed Bin Salih, commended President Mahama for his humility and demeanour, noting that they are characteristics that if he holds on to, will bring him success.

Various scholarship awards were presented to deserving students from BECE to PhD level.