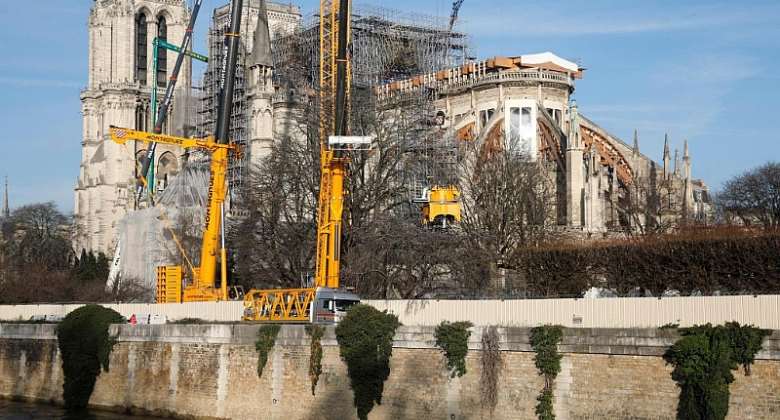 The French general overseeing the reconstruction of Notre-Dame Cathedral says the Paris landmark remains in a precarious and unsafe state, more than nine months after it went up in flames.

Gen. Jean-Louis Georgelin told French broadcaster CNews on Sunday that “the cathedral is still in a state of peril” after last year's fire, which destroyed its roof and brought down its spire, as the cathedral was undergoing renovations.

“Notre-Dame has not yet been saved. There is an extremely important step ahead, which is to remove the scaffolding that had been built around the spire,” he said, referring to the 50,000 metal pipes that the fire fused together into one massive cage-like structure.

The rector of Notre-Dame, Monsignor Patrick Chauvet, said in December that the cathedral is still so fragile there's a “50 percent chance” the structure might not be saved, because the scaffolding may fall onto its fragile vaults.

A former chief of staff of France's armed forces, Georgelin was named by French President Emmanuel Macron to lead the reconstruction effort for Notre-Dame.

He said the actual condition of the cathedral's vaults is not fully known, which means he could not guarantee that “it won't fall apart".

But reassuring observations made on the 12th-century cathedral since the 15 April inferno led him to "feel quite confident".

The scaffolding on Notre-Dame should be removed by mid-2020 and the restoration work should start next year, he said.

€922 million collection
Georgelin is also in charge of managing the €922 million that was pledged in donations following the blaze. He said he was "not in the least worried about our capacity to collect the funds".

But Georgelin announced on Sunday that between €400 and €500 million had already been collected, of which €85 million had been spent on consolidating and securing the cathedral.

While the massive dontations were widely welcomed at the time, they have raised eyebrows and angry comments from some parts, including Australia, which is battling raging bushfires which have killed at least 23 people and destroyed large swaths of the country's landscape and wildlife.

Many took to Twitter to express dismay at the apparent ease with which such huge sums were raised following the burning of a cathedral compared to a country on fire.

"So the world can raise 835 million euros for a single church in Paris, but Australia has been on fire since September, and the best we can do is a measly 17 million?!  I am ashamed to be human," tweeted another angry Australian.

On Friday, Australian comedian Celeste Barber launched a crowdfunding appeal on Facebook for fire services in New South Wales. More than €12 million has been raised in the last 48 hours.

The donations have been praised by Australians on social media, but some regretted that private citizens were raising funds which should have come from the government.