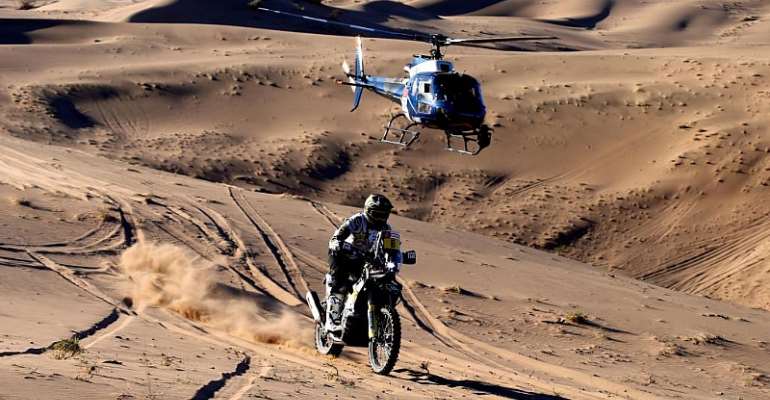 After decades on the African and American continents, the gruelling Dakar Rally kicks off in the kingdom of Saudi Arabia on Sunday. It will undoubtedly make for great pictures, but critics say the sporting event is being used to deflect attention from human rights abuses.

351 teams embark on the 9,000km course today. They will have to navigate some of the world's most spectacular dunes and desert to make it to the finish line in Al-Qiddiya on 17 January.

Broadcast in 190 countries, Dakar 2020 will pass through a range of sites including NEOM the $500 billion futuristic megacity under construction, the heritage site of Al-Ula and the sand dunes of the vast Empty Quarter desert.

Quentin de Pimodan, an expert on the Sunni kingdom at the Research Institute for European and American Studies, said the rally "will serve Saudi Arabia the same way the Tour de France serves France".

"It will showcase the landscapes and the heritage...as the kingdom opens up to international tourists," he said.

Soft diplomacy or 'sportswashing'
Dakar 2020 is just the latest international sporting event to take place in Saudi Arabia as part of a multi-billion-dollar push to boost its global image.

The Kingdom has come under heavy international criticism over its human rights record since the murder of Saudi journalist Jamal Khashoggi in Istanbul in October 2018.

The Saudi-led military intervention in Yemen and the kingdom's crackdown on dissent – particularly feminist activists who have faced sexual harassment and torture in detention – have also battered its image.

In 2019, Saudi Arabia executed at least 187 people on death row, according to a tally based on official data, the highest since 1995 when 195 people were executed.

Human rights activists accuse Saudi rulers of 'sportswashing': using such events as a tool to soften their image.

Saudi human rights group Al Qst called on Amaury Sport Organisation, the French company which runs the Rally, along with all those taking part, not to be party to the sportswashing exercise.

“We ask them not to let themselves be bought out, not to be used to hide human rights abuses,” activist Yahia Assiri told RFI.

'Complicit in propaganda'
For Antoine Madelin of the International federation for human rights (FIDH), the Dakar Rally can provide a real platform to improve human rights in the kingdom.

“I am convinced that if the Dakar community is mobilised, it will have an impact and the authorities will be forced to back-pedal,” he told RFI.

Ironically, over a dozen women drivers are to take part in the Rally, while several Saudi women activists remain in jail for promoting the right to drive – despite the Kingdom lifting the ban on women at the wheel in 2018.

The FIDH is also calling on those broadcasting Dakar 2020, including France's public broadcasting group France Télévisions, to use their muscle to pressure Saudi Arabia for change.

“Women activists sit in prison in Saudi Arabia for simply demanding the right to be able to drive,” Madelin explains. “French companies like Amaury and...France Télévisions, are either victims of Saudi propaganda, or are complicit in this propaganda.”

On 3 January, Human Rights Watch, MENA Right Group and 11 other international human rights organisations signed a joint communiqué demanding the Amaury Sport Organisation “use its decision to move the Dakar Rally to Saudi Arabia to denounce the persecution of women's rights advocates in the country”.