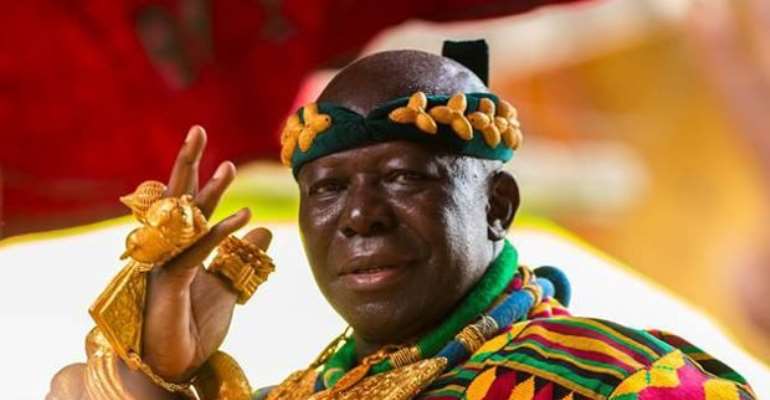 The Asantehene, Otumfuo Osei Tutu II has received the ‘Pillar of Peace’ award of the Africa Premier Leadership Awards (APLA).

The award was to recognise him for his peaceful and transformational 20-year reign on the Golden Stool.

During a ceremony at the Manhyia Palace, the chairman of the Award Scheme, Prof Tal Edgars indicated that Otumfuo Osei Tutu II has consistently managed and arbitrated conflicts with proficiency that has resulted in sustainable peace.

“Since the beginning of your reign, you have consistently exhibited the knowhow, a repository of wisdom, exemplary leadership and peaceful co-existence.

“Your imperial skills and peaceful negotiations, arbitrations and complete resolution have resulted in an amicable resolution on the various long chieftaincy crisis and have brought peace,” he stated.

On his part, Otumfou Osei Tutu II expressed his gratitude to the group for the recognition of the efforts of Manhyia in promoting peace in the country and on the continent.

Born as Nana Barima Kwaku Duah, Otumfuo is the 17th Asantehene of the Asante Kingdom. He was enstooled on April 26, 1999.

He is in direct succession to the 17th-century co-founder of the Ashanti Empire, Otumfuo Osei Tutu I.

The Asantehene is also the Chancellor of the Kwame Nkrumah University of Science and Technology (KNUST) and the Grand Patron of the Grand Lodge of Ghana and the Sword Bearer of the United Grand Lodge of England.

August 4 declared public holiday in celebration of Founders ...
57 minutes ago