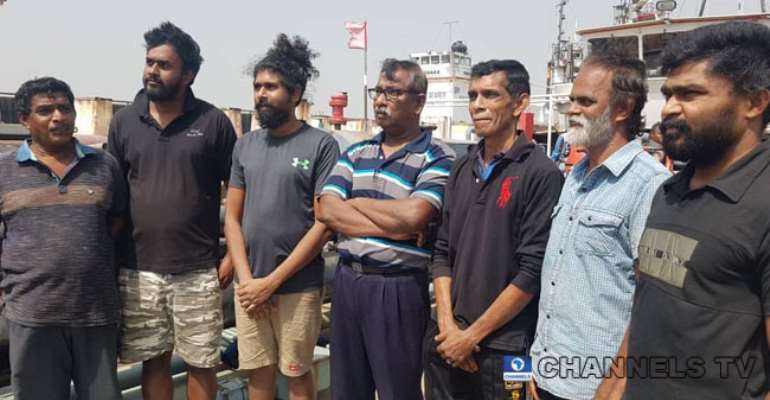 Commodore Ibrahim Shettima, the Commander of Nigerian Navy Ship (NNS) Beecroft has disclosed how the military nabbed nine foreigners and 50 Nigerians who were involved in illegal oil dealings on the nation's water ways.

In total, seven vessels were apprehended in the process, aside from the above crew members.

The Navy listed MV Zebrugge as one of the seized vessels.

Shettima on Friday identified the culprits to include seven Sri Lankans, two Ghanaians, and 50 Nigerians.

The vessel conveying the Sri Lankans is reportedly laden with petroleum products without the right documentation.

According to reports, the arrest was made by the naval ship – NNS Beecroft during the festive season, while those apprehended, had been presented to the Economic and Financial Crimes Commission (EFCC) as well as the Department of Petroleum Resources (DPR) for prosecution.

The authorities are expected to gather necessary data for proper investigations.

Oil theft is rife in Nigeria. Various groups of persons including the military personnel had been accused of the crime. As of 2013, a UK Guardian report stated that Nigeria loses 1 billion Pounds to oil theft monthly.

In 2015, Africa Check reported that the amount of crude oil stolen from the country could not be really quantified but noted that oil is being stolen at 'an industrial scale' by several groups including organised criminals.

Last year, Reuters also reported how oil theft cost the country 22 million barrels, just in the first half of 2019.

The captain of the intercepted MV Zebrugge, has however denied involvement in the alleged crime, saying he was only engaged to convey the oil products to Ghana.

Report by Channels noted a similar occurrence on 21st December, last year about how MT Jonko was arrested with 11 Nigerians on board and 1077 metric tonnes of crude oil.

“Samples of the product have been collected from various compartments of the tanker for further analysis.”

Captain of the MT Jonko also reportedly claimed he was only commissioned as a transporter to deliver the goods to Togo.