Thoughts Of A Nima Boy: Latif Shows Form With Thank God For Idiots 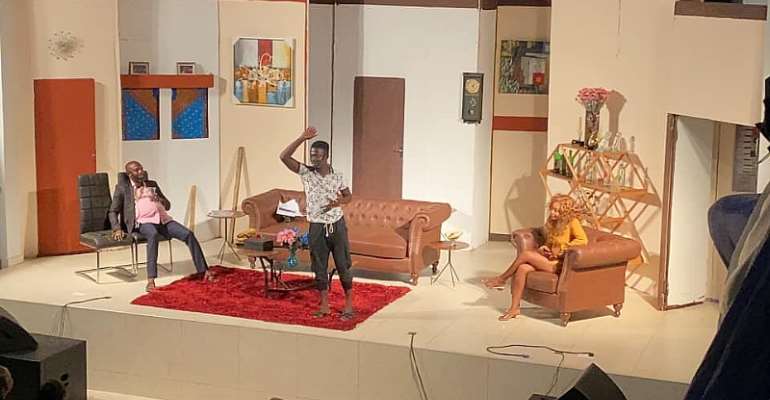 The book that engulfed my brains as I rode in the night from the GNAT Hall few days ago was the late Efo Kwadjo Mawugbe’s satirical radio drama, The Prison Graduates, which really diagnosed the problem of Africa that “until sub-Saharan Africa accepts the blame for her predicament, we will still be a long way away from a practical solution to her problems. So long as Sub-Saharan Africa produces what her children do not consume and continue to consume what she does not produce, the sub-region and her children shall continue to be at the mercy of the developed countries.” It is of no wonder that the play won the BBC International Playwriting Competition in 2009.

The reason it kept flashing in my thoughts was due to the fact the play had four characters. And I was just returning from another play which used just three characters to proffer solutions to the numerous and uncountable marital problems we see, hear, or read about in this country. The play is Thank God for Idiots written and produced by Latif Abubakar.

Latif Abubakar is a playwright who has become a stickler for theatre for development. He has thought, written, directed and produced fourteen plays that have been performed 67 times across the country to an audience base of 40,000. He is the only playwright in Ghana to direct and produce a play on a living legend and have him feature on stage. That was last year when his play had the National Chief Imam of Ghana and the former Archbishop of Accra live on stage.

On the 1st of January, 2020, he ended his Best of Plays for 2019 at the Ultra-Modern GNAT Hall. The show attracted hundreds of people and the performance was an absolutely great one by all standards. The audience was thrilled from the beginning to then end. The never-ending rapturous applause from the audience could easily influence a by-stander to describe the play as a magnum opus especially in a country where Theatre is on its knees begging to be saved.

One significant observation was the time the last show (which I went to see) started. The programme started exactly on time advertised (8 pm) though many participants were now filing in. It is a very significant gesture to mention in a country where public apology before the start of any programme has become the opening prayer. In a country where the presidency announced an Address to the nation will be at 8:30 pm yet the President appeared non-chalantly about an hour later without any explanation. And no one found anything wrong with that. So it is very significant to have Latif start seriously on time. Success or failure can be determined from our attitude towards time in all our undertakings.

The state of the nation alone tells us how we have fared in that regard.

Another great observation was the sound. There was no voice overlap, technical hitches, microphone faults or the numerous sound problems we see when we go for plays and shows in the country. There were televisions present in the hall to help those who could not see the full stage and also everything ongoing was effectively perceptible to the ear.

For the first time in my life, I came into contact with the great Academic and former Vice Chancellor of the University of Ghana, Prof. Akilagpa Sawyer who was a patron of the show that day. The other great personality present to catch the show was Dr. Kenneth Ashigbey, the Chief Executive Officer of the Ghana Chamber of Telecommunications. When I was at the Graphic Communications Group Limited, he was the Managing Director and was always in his African attire. I noted that through his actions and mannerisms, he tries to project the image of Ghana and Africa as a whole. I am yet to see him or any picture of him in suits. He was also present to experience the ideal excellence of the Ghanaian at display by Latif Abubakar. The caliber of people present portends to one particular fact, that Latif has become a dominant force in the Ghana Theatre Industry. With his Globe Productions, he has always ensured that they produce tri-annual plays mostly in April, August and December.

In Thank God for Idiots, he showed great knowledge with the characterization, setting and plot. A couple living opulently off the inheritance of the husband’s late brother had their marriage on tenterhooks, always cursing and talking back at each other. The play will later reveal that they had lost touch with the very significant chemistry that attracted them to each other. They got into a labyrinth of interesting revelations and interactions after they received a knock on their door one midnight. Their new houseboy, Apisco, was on top of every marital problem; diagnosing the issues and proffering solutions. Through deep witticism and humor, he carried the audience along from the moment he appeared on stage to the end. He also evoked the power of music to drive home his messages. In the end the couple, Mr. and Mrs. Kpush renewed and refreshed their love and lived happily ever after. The play was laden with so many lessons that even the most avowed celibate will use them to counsel others about marriage. The play re-emphasizes what was captured in the book So Long a Letter by the Senegalese writer Mariama Ba. She stated that “marriage is an eternal compromise.” And I agree with that.

I doff my heart to Latif Abubakar and look forward to his future productions. He is one of the few people that are diligently working around the clock to give a cardiopulmonary resuscitation to our Theartre industry that is in a serious cardiac arrest. And his plays are always a delight to catch. I leave him with the words of the great Vince Lombardi. He stated that “It is time for us all to stand and cheer for the doer, the achiever — the one who recognizes the challenge and does something about it.”