America Versus Iran: Should Africa Get Worried? 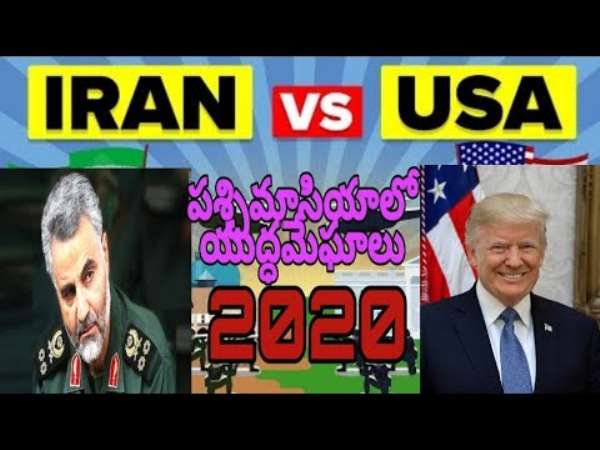 Such is a question that is definitely running in the minds of the patriotic African who worth his colour. The universal African proverb that says: 'when two elephants combat in the forest, it's the grass that suffers' becomes an omen that calls for concern to the latest warfare between the world economic power America, and the oil giant, Iran.

As a Soldier of the Revolution that's bent on rebuilding from the ashes the fallen walls of Ghana/Africa, I'll address these "fearful" happenings as follows:

My mentor Trump miscalculated his steps this time. But, that's politics. He may gain at the end. This is an election year. Underline that.

Americans, as seen played everywhere in the pursuers of the New World Order, votes largely on the performance of the economy.

Be it at the expense of bloodletting or a generous philanthropic giving.

Then also, like as some put it; Iran can 'highly hardly' do something hurtful against the USA.

Yes, definitely Iran will take revenge as said by the Iranian foreign minister Mohammad Javad Zarif to the press. We should expect imminent hikes in oil prices. We should expect sabotages against American interests in oil fields and other businesses in the Middle East, and by stretch, the world over.

We should expect proxy guerrilla warfares against American troops in the Middle East and the world over.

Persia (Iran) never buckle under the first blow. They definitely take revenge. So, like we the Goka people say it: "he who shakes the shady tree should not get surprised when visited in the neck a resident of the tree - snake".

This is the United States of America, they saw before leaping. It's a warfare. They claim the killed Iranian general, Qassem Soleimani, has masterminded, killed, and injured thousands of Americans in the Middle East. Not to talk about raids on American interests there. Latest cited is the Saudi oil fields attacks that immediately jumped petroleum prices last fall.

I'm not sure people still believes in moral absolutes that still calls "revenge" a " sin".

Let's believe in situational ethics that comes with its solutions on impulse in this 21st century and see what the next century will birth for us.

Concluding, as it's in all warfares, it's the end that justifies the means. Both countries and their allies have claims that justify why they've killed, and would take a revenge.

The political student shouldn't take this "as a world cup though". (Not to take it 'overly' serious). Politics is a game played by the Masters. The dead general will definitely have a successor. There could be an interest there. You definitely know of an insider job, those the traitors who sell out their superiors.

America stands to gain also in business now. Countries in the middle East who are allied to America must arm and wait for Iran's possible retaliation. From where do they purchase the guns, grenades, bombs and the drones? From the lead producer of such armoury- The United States Of America!

Are you getting the clearer picture now?
Such is politics, if indeed we're building again Ghana/Africa from the debris, what's going on today between America and Iran should be a test case for all Soldiers in the Revolution.

Our ultimate goal should be: in the interest of the Ghanaian/African. What stymies that is a weed that deserves a perfect clearance!