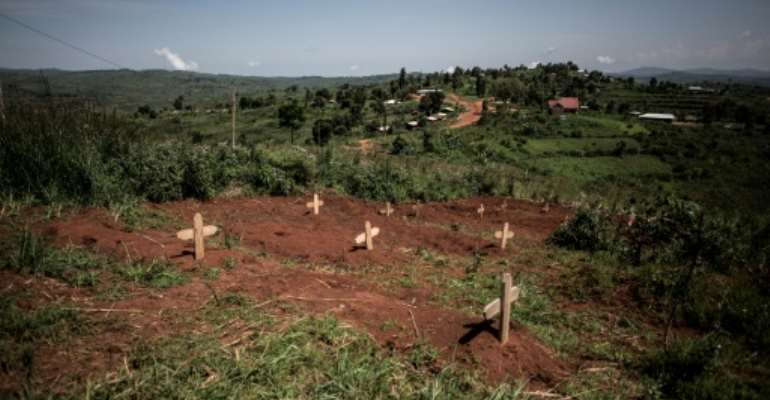 Graves of fallen DR Congo soldiers are pictured in July 2019 outside a base in Djugu, eastern DR Congo. By John WESSELS (AFP/File)

Militants have killed 60 Democratic Republic of Congo soldiers since October in the restive east of the country, the army said in a statement Saturday.

"In the space of two months, 60 brave combatants have fallen in the field of honour" in the military campaign against fighters of the Islamist Allied Democratic Forces around the eastern city of Beni, military spokesman General Leon Richard Kasonga said.

A total of 175 other soldiers have been wounded, he added.

Kasonga added that there was an ongoing campaign online and in certain media accusing the FARDC (Congolese armed forces) as well as the UN's MONUSCO peace-keeping mission of "colluding with the slaughterers".

This he said was merely a bid to discourage the troops who remain "determined to carry out their mission to eradicate the ADF".

ADF fighters have killed more than 200 people since the army launched an offensive against the militia on October 30, according to a toll compiled by civil society groups.

Such figures have sparked anger over the authorities' response.

The Islamist militant group began as a rebellion hostile to Ugandan President Yoweri Museveni, one of Africa's longest-ruling leaders having seized power in 1986.

The group fell back into eastern DRC in 1995 and appears to have halted raids inside Uganda. Its recruits today are people of various nationalities.

Army chief of staff General Celestin Mbala and his team have been based in Beni since the end of November.

General John Numbi, a close associate of former president Joseph Kabila and the army's inspector general, arrived a few days later. He is under EU sanctions for his part in deadly crackdowns on protesters during Kabila's rule.

Last month, the Congolese army said it had "neutralised" 80 ADF fighters, including four of its six main commanders since the operation began in October.

Don't succumb to pressure to support LGBTQI agenda – GMM to ...
3 minutes ago