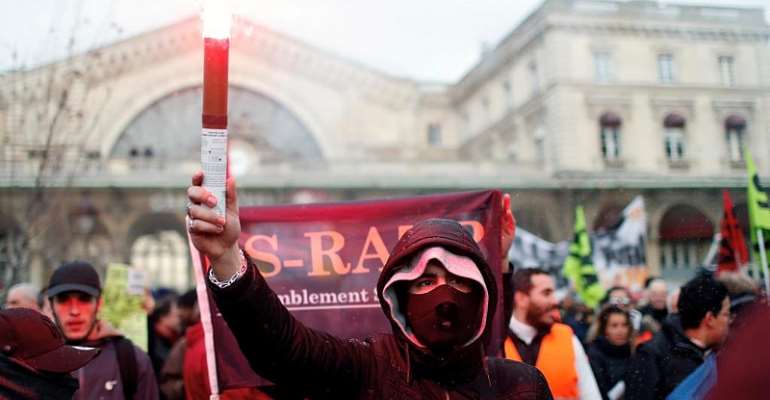 Demonstrations and strikes against French plans to reform the pension system entered their 31st day on Saturday, leaving the previous 1986-7 record of 28 consecutive days of strikes behind.

Active opposition to the government plans started on December 5 with a public transport strike affecting suburban trains, metro, bus and tram lines in the Paris region, causing massive problems for people to get to work.

In the southern city of Marseille, a few hundred people demonstrated, while in the southwestern town of Toulouse dozens of Yellow Vests, who have been demonstrating since November 2018 against the government's fiscal and social policy, entered a station while some occupied tracks in support of the striking railway workers.

A cooperation of the most powerful trade unions, CGT, FO, CFE-CGC, Solidaires and FSU requests the withdrawal of the governments' pension reform plans, which provides for the merger of the 42 existing plans -including special plans that allow train drivers to take early retirement- into one universal plan that is applicable to everybody, regardless the specification of his or her job.

The government does promise a "fairer" system for everybody, but opponents of the reforms say the policy will result in a higher age of retirement and lower pensions.

According to an opinion poll by pollster Odoxa published Friday, a majority of 61 percent of those questioned still support the strike, five points lower than a December 19 survey.

Unions have called another day of mass demonstrations for January 9, when teachers, hospital workers and others are expected to join the strike.

Anti-LGBTQI+bill not to engender hatred for persons, meant t...
42 minutes ago

JB’s two phones tendered in as evidence
42 minutes ago