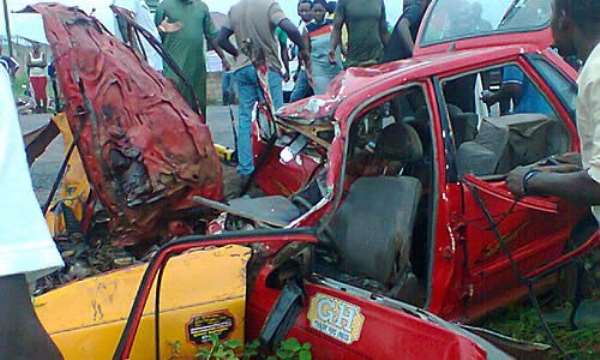 The number of persons killed in car accidents in the Upper West region has increased marginally from 57 deaths in 2018 to 58 in 2019.

According to him, the records included persons below 18 years of age, which increased from four to seven deaths respectively.

The statistics from the regional office of the Motor Traffic and Transport Department (MTTD) of the Ghana Police Service also indicated that the total number of persons injured increased from 182 in 2018 to a total of 287 in 2019.

The Regional MTTD/Wa recorded the highest number of 34 and 28 deaths in 2018 and 2019 respectively whilst Nadowli District and Lawra Municipality contributed seven and 10 deaths to the records in the respective years.

However, fatal cases reported decreased from 54 in 2018 to 43 in 2019 whilst the total number of serious cases shot up from 43 cases to 80 cases respectively.

Minor cases equally saw a rise from 26 to 31 cases in the respective years.

While all the nine police Districts recorded cases of accidents in 2018, three of them namely; Tumu, Funsi and Wechiau Districts all recorded zero cases in 2019 according to the statistics.

Narrow roads, non-compliance with road traffic regulations and speeding are some of the reasons contributing to accidents in the region according to the MTTD.

He cautioned drivers against drunk driving, noting that the practice put human life in danger and should not be entertained by drivers.

DCOP Nyarko said the police administration would strengthen the MTTD with both logistics and human resource to carry out its mandate of ensuring sanity on the roads.