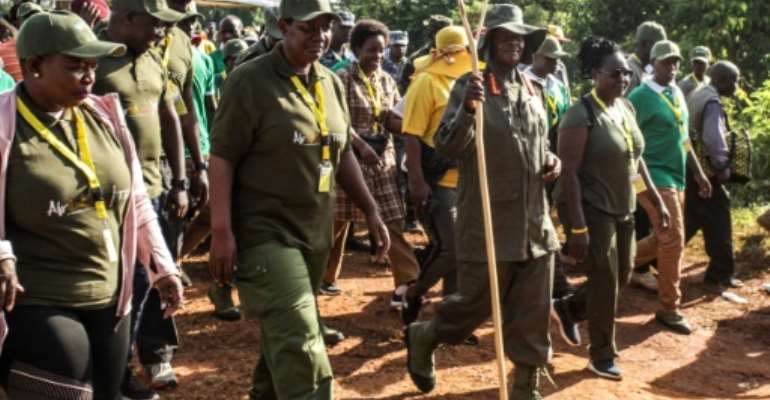 Ugandan President Yoweri Museveni and veterans and Members of Parliament, march through the jungle as he retraces the route which his guerrilla forces took 35 years ago. By Hajarah Nalwadda (AFP)

Ugandan President Yoweri Museveni on Saturday began a six-day march through the jungle to re-trace the route through which his guerrilla forces seized power three decades ago, which critics dismissed as a bid to rally support ahead of 2021 elections.

Museveni is one of Africa's longest-ruling leaders, having seized power in 1986 after taking part in rebellions to end the brutal rule of Idi Amin and Milton Obote, and is expected to seek a sixth term in office in the next elections.

He began what will be a 195-kilometre (121-mile) walk from Galamba, north of Kampala, and will end on January 10 in Birembo south of the capital where his rebel army faced one of its toughest battles in the fight to overthrow Obote.

"The great trek started today and will last six days. This is a journey that the president is leading, a journey through the past to appreciate the present," Museveni's senior press secretary, Don Wanyama, told AFP Saturday.

"The journey will take a week through the jungle, a route the liberators led by Museveni took to liberate the country."

The walk comes a month after the president led an anti-corruption walk through the capital in a move derided by critics who said that the corruption took place under his government.

Museveni is facing an election challenge from pop-star turned leading opposition politician Bobi Wine, who appeals to a youthful population that has only ever known one president.

"This (trek) is part of the wasteful ventures government is taking aimed at boosting his (Museveni) dwindling support among Ugandans," the singer -- whose real name is Robert Kyagulanyi -- told AFP.

Ugandan President Yoweri Museveni and veterans and Members of Parliament, ready to march through the jungle as he retraces the route which his rebel forces took 35 years ago. By Hajarah Nalwadda (AFP)

"My advice is rather than spending taxpayers' money on such trips, Museveni should know time is up for him to leave power. Time for hoodwinking peasants has passed him. The peasants and everyone in Uganda are demanding change and no less," he said.

Asuman Basalirwa, an MP from the opposition Forum for Democratic Change, slammed the trek as a "campaigning tool".

"Ugandans deserve better than a president walking through a jungle. Time spent should be used for other important issues affecting the country especially how he plans to hand over power," he said.